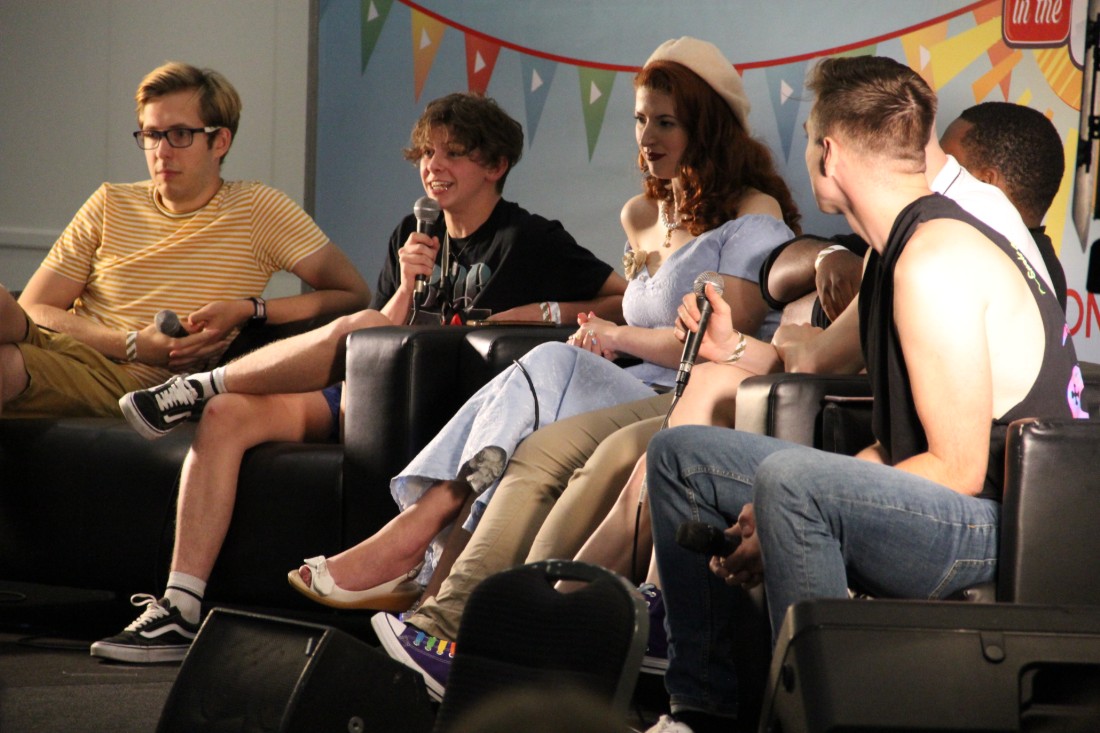 The LGBTQ+ panel took place on Saturday at Summer in the City 2019, in Panel Room A. Chaired by Calum McSwiggan, it featured Evan Edinger, Noah Finn Adams, Jessica Kellgren-Fozard, Machaizelli Kahey and Roly.

The panel began with each of the panelists introducing themselves. Evan kicked it off, sharing that he identifies as on the asexual spectrum, and creates videos discussing the topic with the viewers, as well as alternative content.

Next was Noah, who makes music and trans content. He specified that he identifies as gay and trans.

Jessica then shared that her content focuses on chronic illnesses and the LGBTQ+ community, and Mac creates “a lot of weird things on the internet” and identifies as gay.

Last was Roly, who creates content about body modification and identifies as queer.

Calum kicked off the conversation with the observation that there is a lack of LGBTQ+ creators that are actively creating content, specifically in the UK. He asked the panel why they think this is the case.

Evan answered first, explaining how he finds that asexuals often shy away from focusing on the topic, which is something he finds himself doing. Noah stated that he believes there are a lot of LGBTQ+ creators, however, there aren’t enough who receive enough recognition.

Jessica disagreed, saying that “One of the things that I absolutely love about YouTube is that it gives us the diversity and representation that regular traditional media isn’t giving us”.

She further explained how it doesn’t matter how small a box someone may fall into, they will find at least another ten people who also fall into that box. This then shows traditional media companies that the community does want that representation. 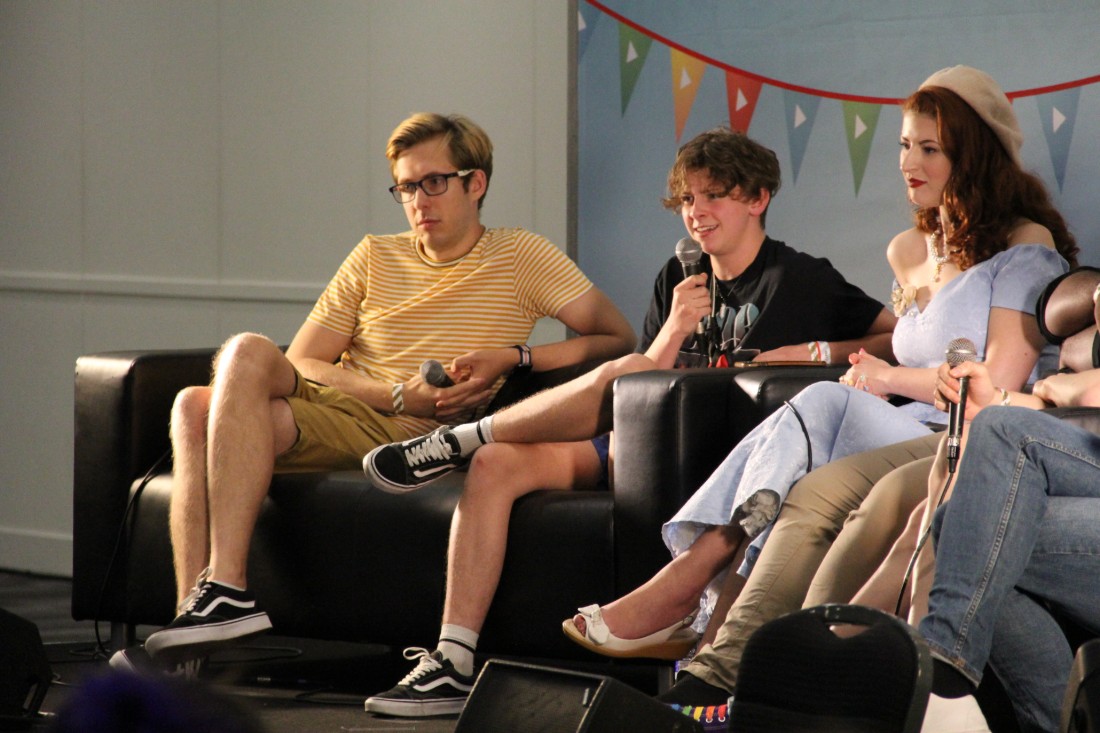 Moving on, Calum asked the panel to shout out an LGBTQ+ creator that they love.

Roly spoke about Luxeria Celes, who had helped him to come out. Mac chose Miles Mckenna, and both Jessica and Noah chose Jamie Raines and Shaaba Lotun. Evan complimented Ash Hardell for being outspoken and “the nicest person he has ever met”, despite the negativity they regularly receive.

“Do we think there’s more [hate] online at the minute?” asked Noah. He observed that because more people are becoming comfortable with their sexual and gender identity and sharing that, it allows people to have more targets to be negative towards. “They’re only being hated on because its the future” responded Jessica.

Calum then asked what advice the panellists would offer anyone who identifies as LGBTQ+ and wants to start creating videos, amidst fears of negatively. Noah began by stating that obviously, you are opening yourself up to hate, however, making videos also opened him up to a community of people that he loves and wouldn’t have found if he wasn’t out.

Mac shared that because of the lack of representation in traditional media, creating this content allows a lot of people to learn who they are and come to terms with it.

“Having an LGBTQ+ channel does not mean you are necessarily going to receive hate”, explained Jessica, before adding that the hate comments she receives are often not in relation to her sexuality, which makes the homophobic comments easier to brush over because they’re “just wrong”.

Roly added that its best to remember that if someone does call you a horrible name, it’s a reflection of them and not you. 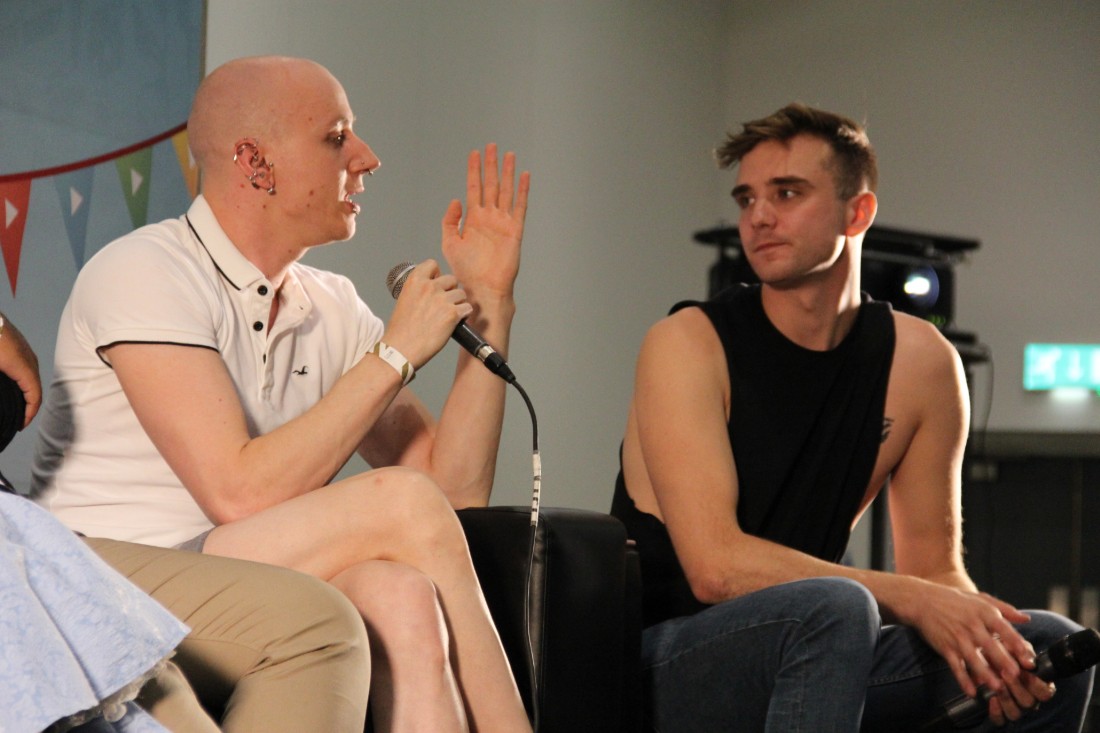 Evan then spoke about how people treat sexuality and gender as if its a choice when it’s not, saying “It’s hard to take bullying if you know it’s not true”. He explained that one of the positives of creating videos for him is the people who’ve praised and thanked him for creating the content and helping them discover their own identity.

On the flip side of pride, Calum then asked the panel if they’d ever felt boxed in by their identity. Noah shared how being trans isn’t the defining feature of his life, because his content focuses on his music. However, people who discover his channel automatically recognise his gender identity over the intention of his content.

Adding to this, Jessica said that “the best representation is always ‘happens to be’. So you’re a musician who happens to be trans”. Calum shared how he’s felt for years that representation has always been the doom and gloom, whereas now he wants to just see people living happy lives.

Calum moved the conversation onto the current debate of LGBTQ+ issues being taught in schools. “I think children should be taught from the youngest possible age about diversity”, Jessica answered.

Agreeing, Roly brought up the common misconception that educating children on LGBTQ+ related topics will encourage them to be LGBTQ+ themselves. He said, “We grew up with mainly heterosexual stuff being broadcasted everywhere, we’re still queer!”.

The next question to the panellists focused on how a lot of people, particularly now, make comments about how “being LGBT is becoming a trend”. Noah pointed out the existence of the concept of “transtrenders” and how people within the trans community jump on each other and hold each other liable when they rediscover themselves.

Calum closed the panel by asking why the creators are so happy to be making LGBTQ+ content. Both Noah and Jessica agreed that an amazing part is meeting the parents of their viewers.

Calum shared how when he first came to Summer in the City, he watched the LGBTQ+ panel himself, and since then he’s gained so many friends from creating his content, who are all so lovely and open. 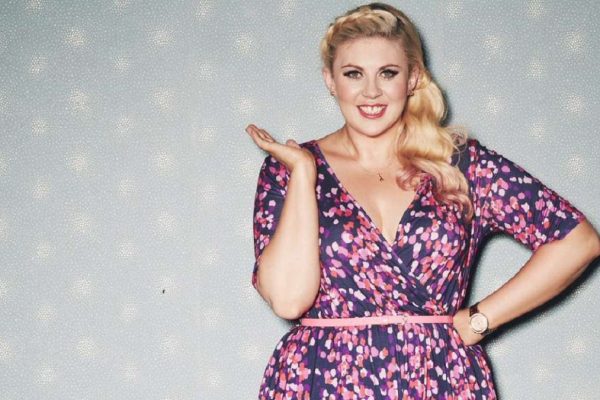 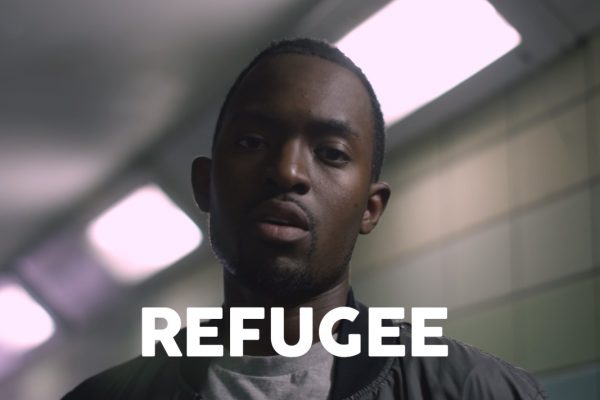