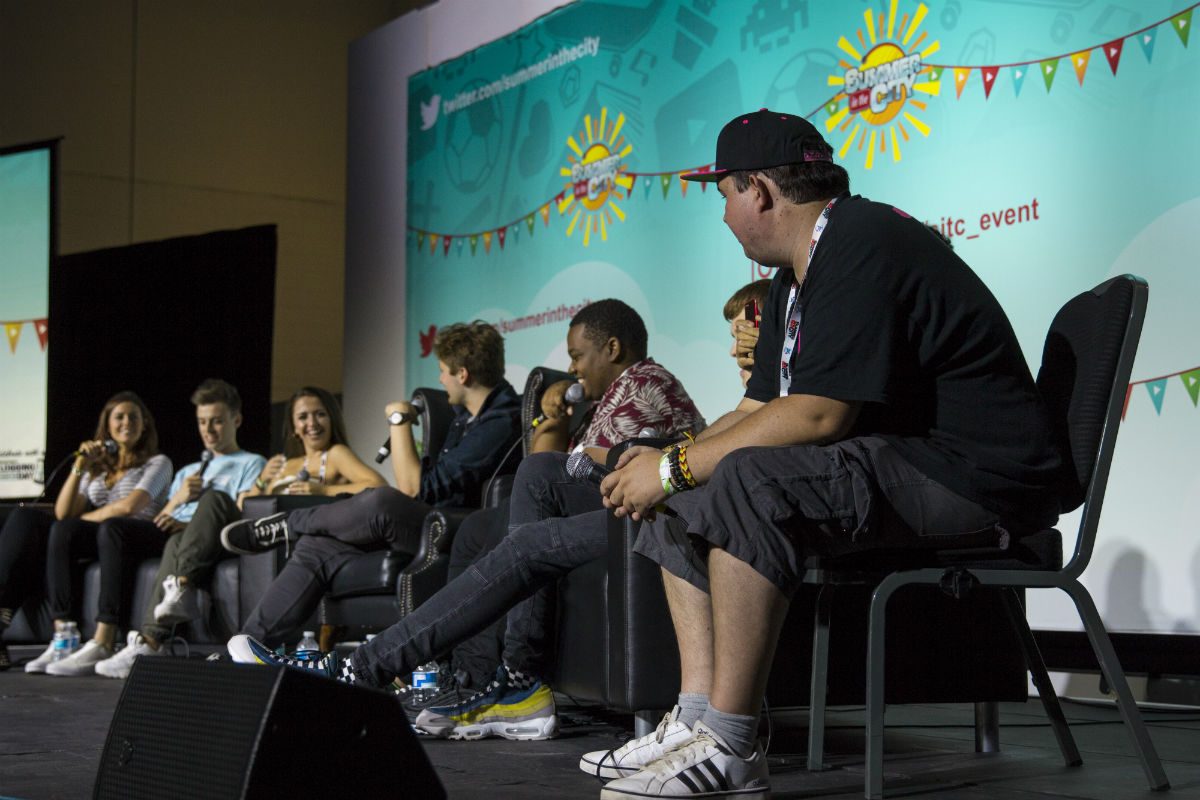 When Joe Tasker immediately fell over as the panellists took to the stage and moderator Jake Pemberton quipped “Joe’s dead”, we knew the Comedy panel at 2018’s Summer in the City was NOT going to be taking itself seriously…

Some of our highlights from the panel also included learning what ‘smacked her arse’ is in sign language, and trying to decide who’d win in a fight out of Laura (those heels), Becky (those nails), or Daz (is the self-deprecating humour just a front?).

So, without further ado, here are nine things we learned from the Comedy panel at Summer in the City 2018!

1) Just because it’s ‘stupid’, it doesn’t mean it’s not funny

“What I find funny is just… it’s dumb” said Daz, citing Lee Evans’ “stupid humour” as one of his main influences. Stupid, slapstick and “unfunny” humour were roundly considered by the panellists as the kinds of comedy that make them laugh.

Niko shared that he’d find it funny if someone ran up onto the stage. No one did, thankfully, but we could see the Summer in the City volunteers visibly tense at the thought.

Laura loves “anyone that doesn’t take themselves too seriously” saying Joe was a great example of that. Living up to his name, when asked what he found funny, Joe said: “A mirror, sometimes.” 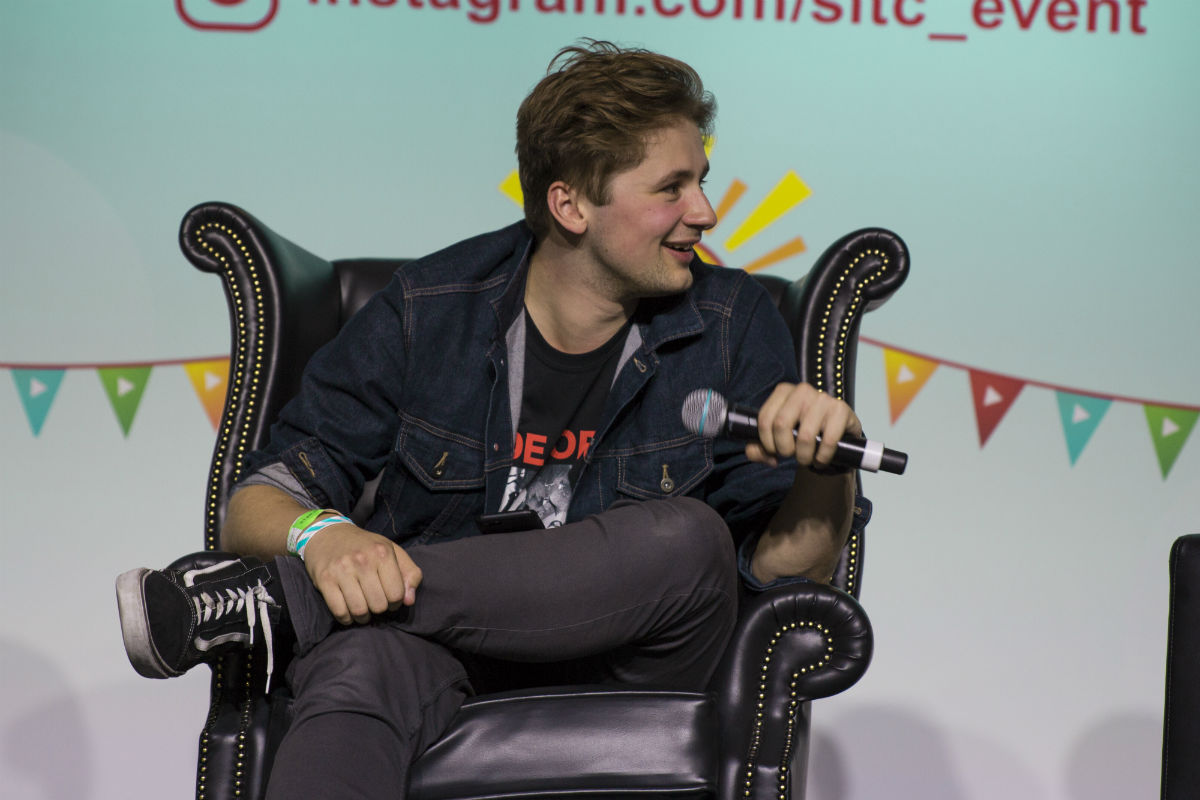 Thanks for that one, Jake. Way to ruin our childhoods! Although, he wasn’t the only one to mention the disturbing qualities of some children’s TV shows. Stephen talked about some bizarre clips from Rosie & Jim he’d seen on YouTube, specifically one of “Jim humping a trolley”.

The panel also talked about discovering how strange shows like In The Night Garden were when re-watching them as an adult. This is why you should never go back.

3) We’re not the only ones who miss Vine

At TenEighty HQ, a day doesn’t go past in which we’re not reminiscing about one of our favourite Vines.

While Daz was originally a Viner, who migrated over to YouTube when the platform closed down, he wasn’t the only panellist to have loved the platform. When asked what she finds funny, Becky said “I find stupid things funny as well, but I have to say Vine. Rest in peace, sorry Daz.” 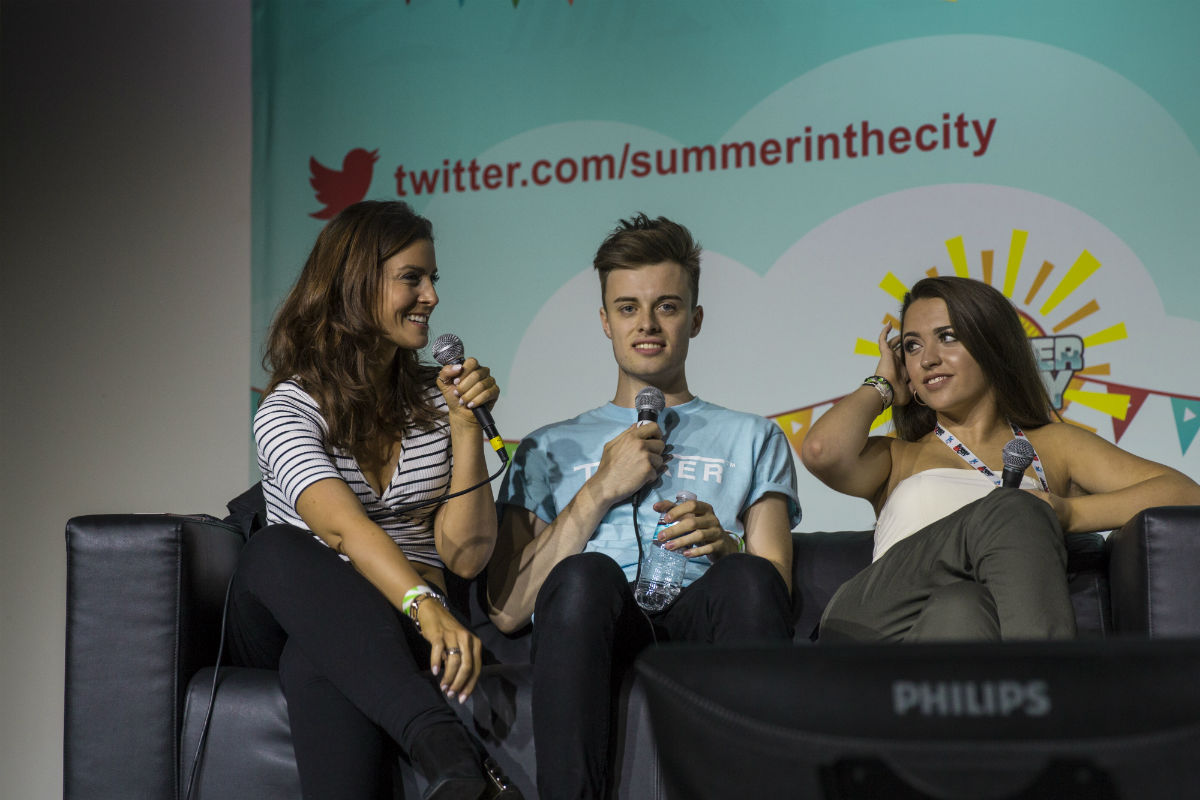 4) It’s OK for comedy to be controversial

Some of Laura’s favourite comedy is controversial, “Especially in this climate, where everyone’s very, very safe, we’re all very scared to hit certain topics […] If you can be funny and controversial, I love it.”

But are there topics you shouldn’t joke about? Stephen doesn’t think so. “There’s certain things that I won’t talk about, [but] just because I don’t have a good knowledge of them,” he said, adding that “anything can be funny, but you’ve just got to find your way of approaching it.”

Laura agreed, saying “if you can make it funny, it is funny”. But there are some boundaries. She draws the line at any comedy that’s ridiculing the victims of a scenario rather than its perpetrators.

We couldn’t agree with this more. Although there are some things he finds too offensive to joke about, Daz does think that most people are too easily offended. “Sometimes I know that I’ve crossed the line because of the amount of people that get upset, so then I’ll apologise,” he said, “but half the time it’s just a few people. Most people get my humour.”

There was universal agreement from the panel, and Mac, a self-defined “obnoxious American”, summed this all up perfectly by saying “I’m offended, but I have no line.”

Joe did raise, however, that it’s important to be mindful of the age of your audience. If you do have a particularly young audience, you need to be more careful with what you say in your videos. 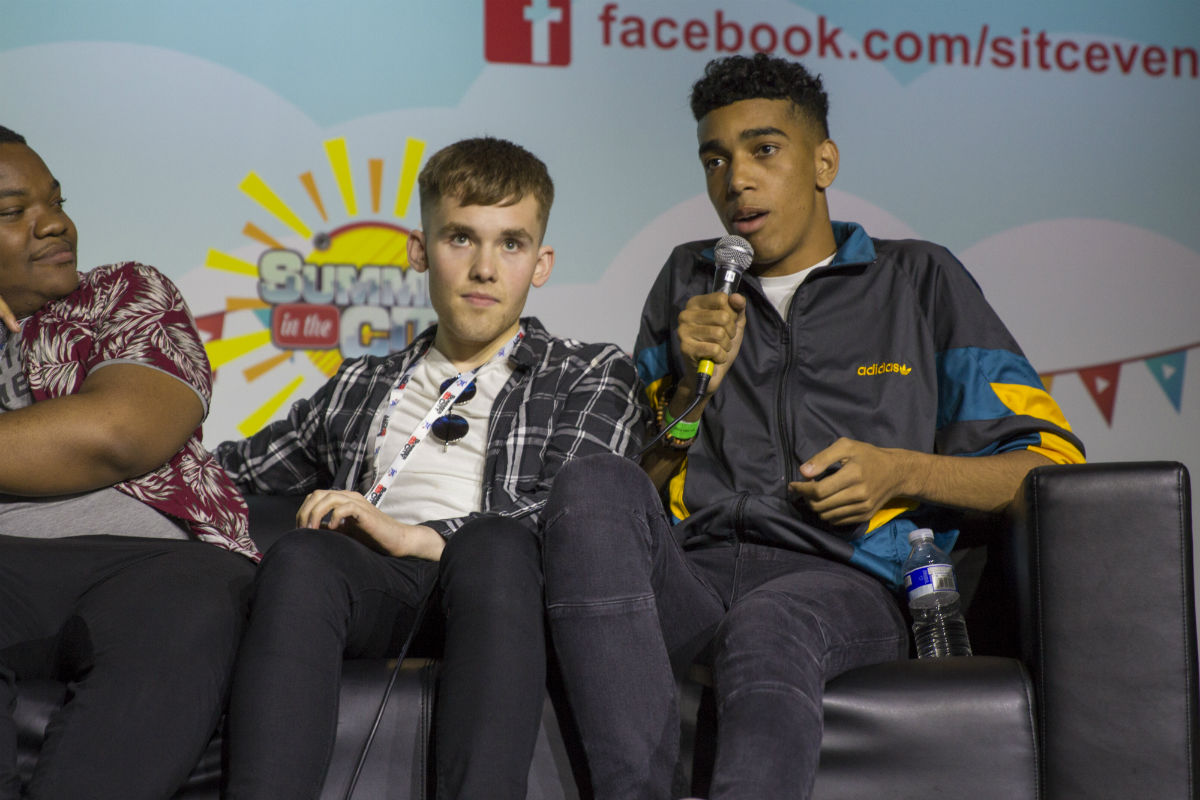 6) Comedy can spring from tragedy

“Shortly after my parents divorced, I went ‘oh, dear, what’s going on?’ I needed to be loved again” was Stephen’s explanation of why he started doing comedy on YouTube. Although played for humour, there’s also a lot of truth behind his words.

When you experience a tragedy or are helping someone through a tough time, comedy can come more naturally, because it can help to lift the mood and make people laugh. “Sometimes during bad times as well it can come out of nowhere,” said Laura.

Joe added that he’d used humour as a coping mechanism at school, saying “all I had was ‘funny’.”

7) Trying too hard is a bad idea

A lot of effort clearly goes into all the content the panellists create on YouTube – you can’t just switch on a camera and hope for the best. However, if you’re trying too hard to make something funny more often than not it’ll feel forced. Or, in Mac’s words: “I feel like when I try, it’s like, shit.” 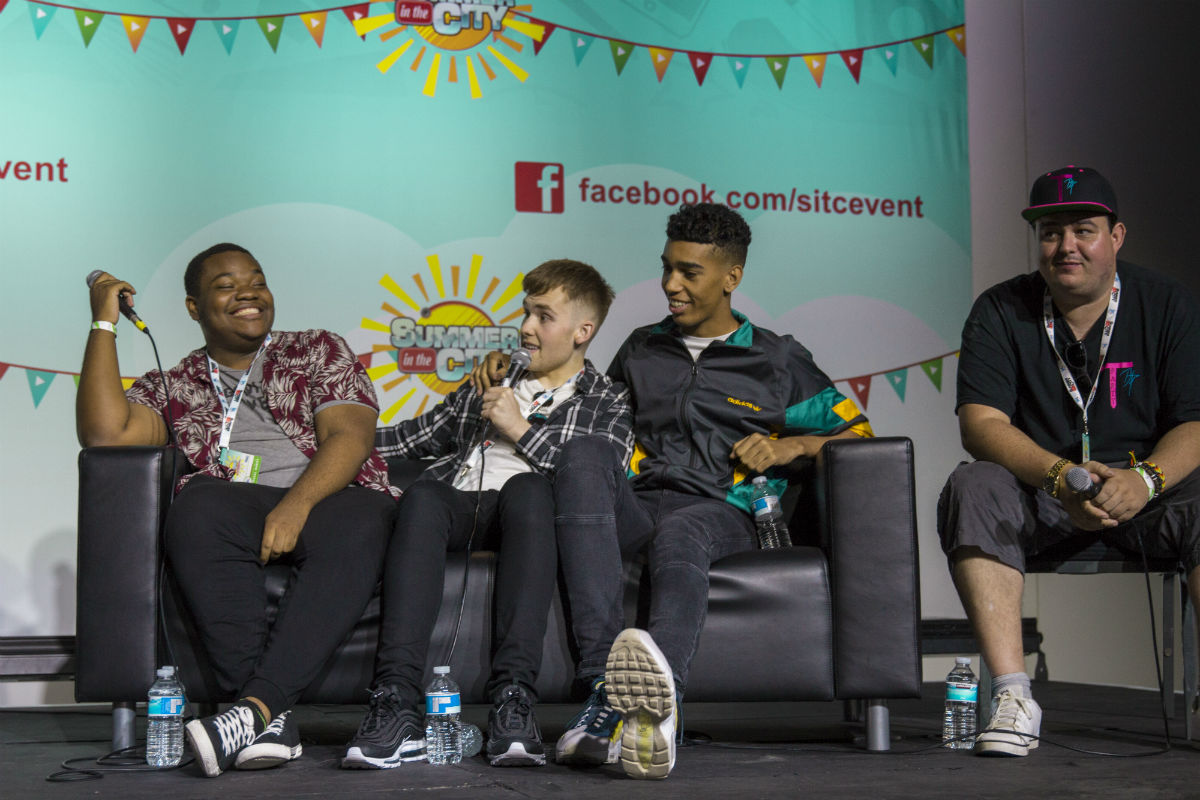 Joe revealed that earlier that day, he’d been running around Summer in the City in a wig pretending to be a fangirl – “Worst disguise ever. I looked more like me for some reason.” Watch the video to judge this for yourself!

For him, unscripted comedy is his favourite: “I enjoy doing it, and it is funny. I haven’t got comfortable in some random thing, because I don’t know what I’m doing next.”

Laura agreed that it’s good to not get too comfortable in your work and to make sure you’re always trying new things.

Wise words from Becky there. Watch her video to find out why. 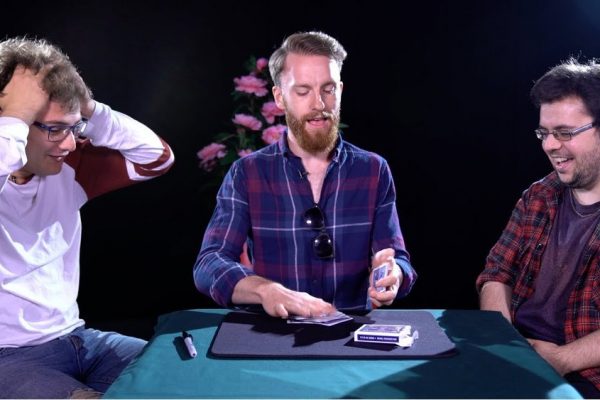 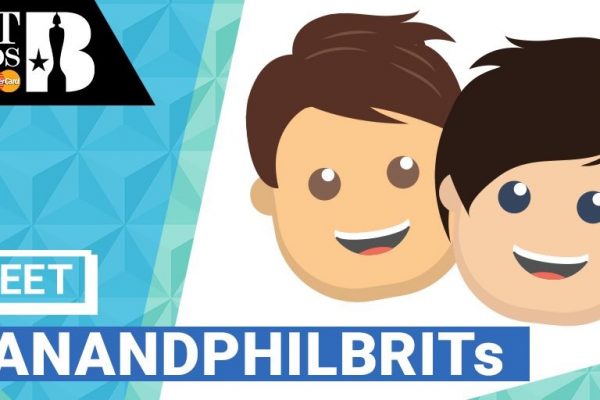