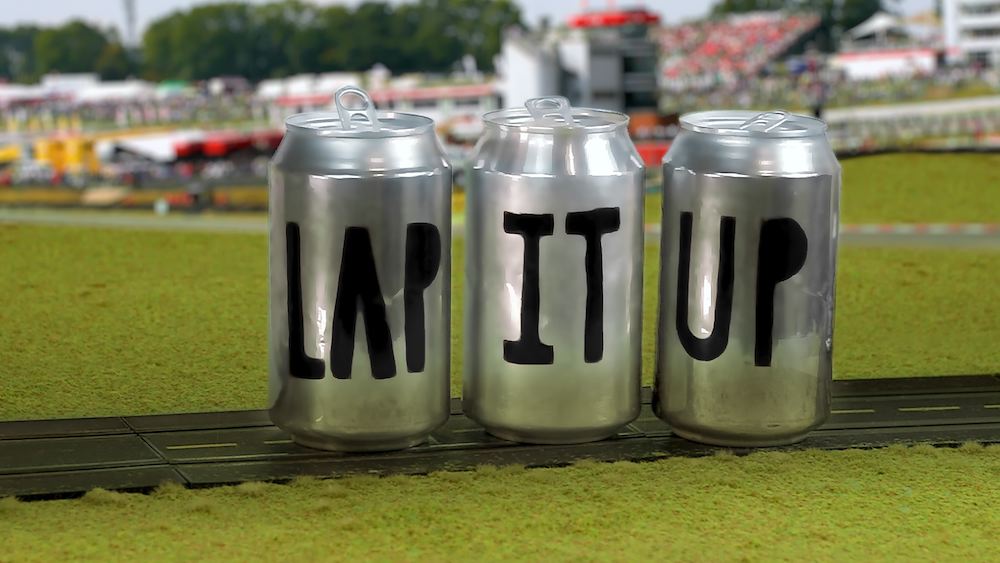 Are you a fan of both racing and YouTube? If so, we have the perfect series for you.

From the mind of Matt Amys comes Lap It Up, a brand new YouTube series that sees creators putting their driving skills (or lack thereof) to the test on a professional racing simulator. However, there’s a catch: for one of their laps, they’ll be wearing drunk goggles.

The series is set to premiere on 14 May, with a week-long debut on Matt’s channel. We’ve been given a sneak peek at one of the episodes and, let us tell you, it’s definitely one of our most anticipated series of the year. Because of this, we’ve compiled a list of ten things you absolutely NEED to know about the series, from how it came about to the YouTubers we can expect to see take on the challenge.

Get ready, you’re in for a ride. (Quite literally.)

1.  The idea was inspired by Drunk Mario Kart

Don’t lie, at some point we’ve all played Drunk Mario Kart. And you know what? It’s a good thing it’s so popular, as without it Lap It Up might not have come into existence.

“I want to make motorsport appealing to a younger generation because, whilst motorsport is very popular, it’s also very self-contained,” Matt explains. “The idea came from a drinking game I played two years ago called Drunk Mario Kart, with my friend Conor Travers. After playing, I was thinking how it could be transformed into something similar, but next level – for example, using a professional racing simulator rather than a Wii remote.”

We knew there was a reason we liked Mario Kart! (Aside from the obvious.) 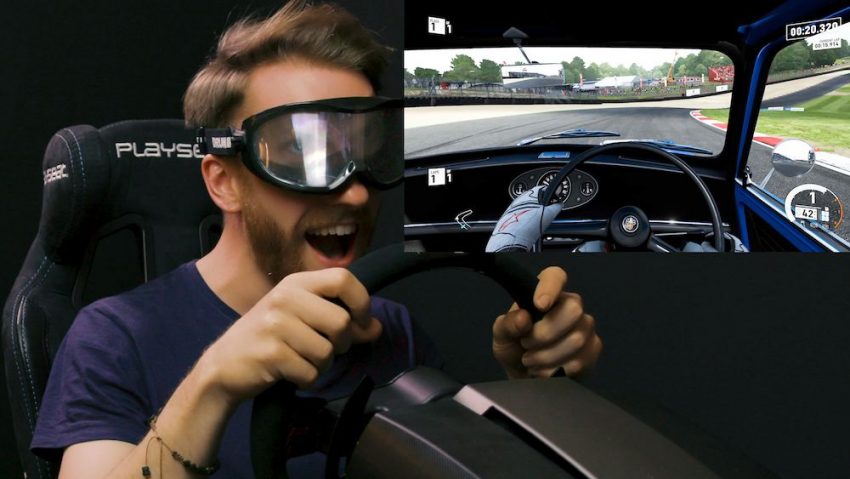 Everyone who’s aware of Matt’s channel knows how seriously he takes racing, so of course he would utilise a professional racing simulator for the series. It allows for a more authentic and entertaining experience, for both racers and viewers.

3. Lap It Up underwent various changes before Matt arrived at the final product

As with many projects our faves undertake, it took a lot of work for the show’s final format to be nailed down. “After so many pilots, receiving feedback and changing the idea, I landed on a format I’m really happy with,” explains Matt. “It’s such a relief having guests come in and seeing how much fun they have, which really makes it special.”

Matt adds that the development process was one of his favourite aspects of filming the series.

4. Some amazing guests are set to make an appearance

ANNOUNCEMENT!
After months of hard work, #LapItUp will begin in three weeks time – here’s a little teaser until then!https://t.co/0p7CKrAjcZ pic.twitter.com/dFfxiTko6C

This series features a whole host of guests trying their luck at the challenge – during launch week, for example, viewers can expect to see the likes of Sammy Paul and Steven Bridges taking it on.

And Matt plans to keep on filming for the remainder of the year, so be sure to keep a look out for the likes of Jack Howard, dodie, and Josh Edwards in the future. We know we can’t wait to see them try their hand at this racing simulator!

5. This is Matt’s largest project to date

Matt is known for working incredibly hard on the projects he undertakes, and Lap It Up is definitely the biggest yet. As he explains, the show took over six months to get correct, and he spent a lot of time working with outside companies as well:

“This has been the largest personal project I’ve worked on to date, taking over six months [for me] to get the format correct and speaking with companies who want to support the show to become the best it can be. Working with partners like Playseat, Forza Motorsport, and Drunk Busters is something even TV companies would be lucky to have. For them to be on board and supportive of the show is very inspiring, especially to a small content creator like myself.”

We love seeing YouTubers getting the support of outside companies to help achieve their goals! 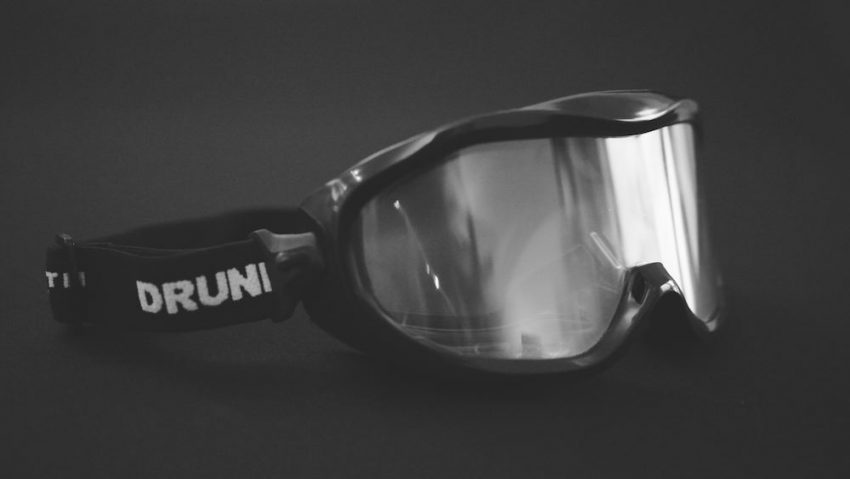 On their first lap, each guest takes on the course normally, without any form of impairment. However, what makes this series so unique is they must race the second lap whilst wearing drunk goggles. It’s this aspect that makes Matt so excited about the series.

“[My] favourite part behind the scenes is when the guests try out the drunk goggles for the first time,” he says, “which is normally to make sure they fit around [their] head correctly. Their reactions to how it affects their depth perception and vision is always hilarious. For example, to test out of the goggles, I usually throw a small ball for them to catch, which 90% of the time never works.”

The goggles simulate what it actually feels like to drive impaired, and as such…

7. There’s an educational aspect to it

While the series was created for entertainment purposes, we can’t ignore the fact there is an educational aspect to it. Everyone is aware of the dangers of drunk driving, but there are still those who ignore it and think they’re okay to drive. Seeing how poorly their fave YouTubers drive this course while wearing the drunk goggles should serve as a PSA that driving while drunk isn’t something that should be done!

8. The series was named by Jon D Barker and Josh Edwards

Lap It Up? Kinda implying eagerly drinking/racing and a pun on the obvious lap, too

Here’s a fun little titbit: Josh Edwards and photographer extraordinaire Jon D Barker are the ones who came up with the name for the series. We feel it covers the premise perfectly.

9. There’s a spectacular crash in an early episode 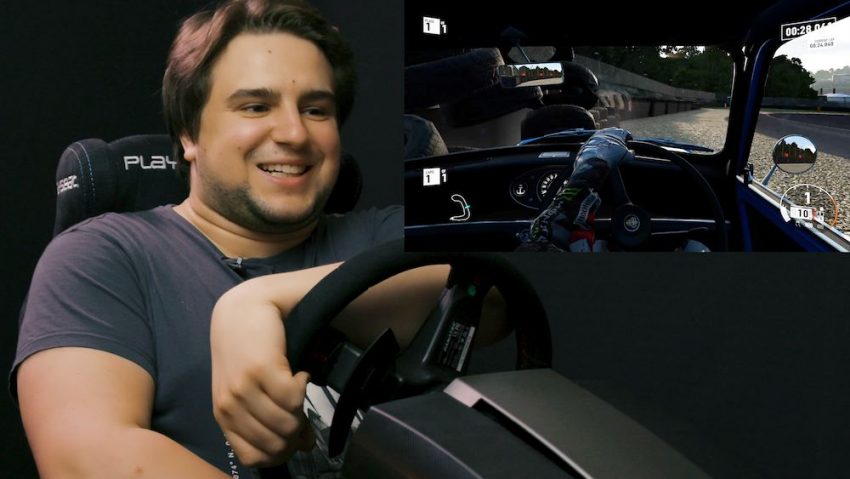 Of the guests whose episodes have been recorded so far, Matt says his favourite would definitely be Sammy Paul.

“My absolute favourite moment was seeing Sammy try out the simulator for the first time,” he tells us. “He was concentrating so hard to get a fast lap, he completely forgot to use the brake and crashed spectacularly – something which you’ll see in the show!”

Considering how dedicated Sammy gets, this doesn’t surprise us one bit. However, it does make us happy he doesn’t have his licence. If this is what happens when he drives with a simulator, we can only predict how he’d be on the motorway.

Good luck trying to avoid Lap It Up during its launch week. (Although we doubt you’ll want to after watching the first episode!) During its first week, Matt plans to upload a video every day, which has us pretty excited.

After the initial launch, new episodes will be uploaded every two weeks.

We need to give this challenge a try!

Have we got you excited for Lap It Up? We sure hope so! Matt’s put his heart and soul into this series and we look forward to it being his return to YouTube. It looks like it’s going to be a fun ride, and we can’t wait to see how well our faves do taking on the challenge!

Want more? It’s a good thing we love promoting the projects our faves have worked on:

About Clare Fitzgerald
Aspiring journalist whose life revolves around Pokémon Go and YouTube. | @JournoClare
View All Posts by Author
Five of the Best: Study Inspiration
Video Spotlight: Talk To Me 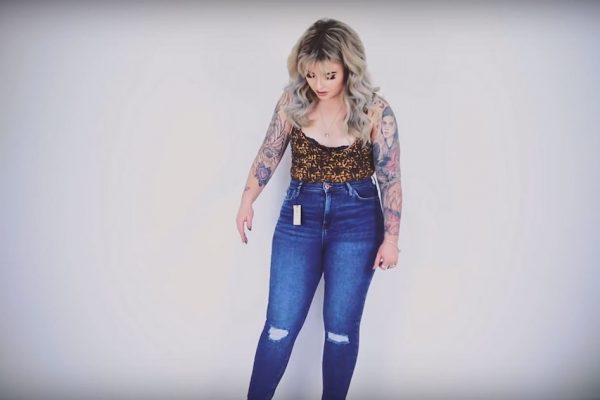 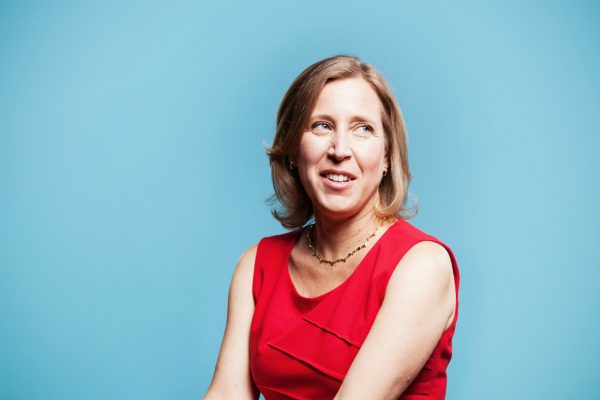 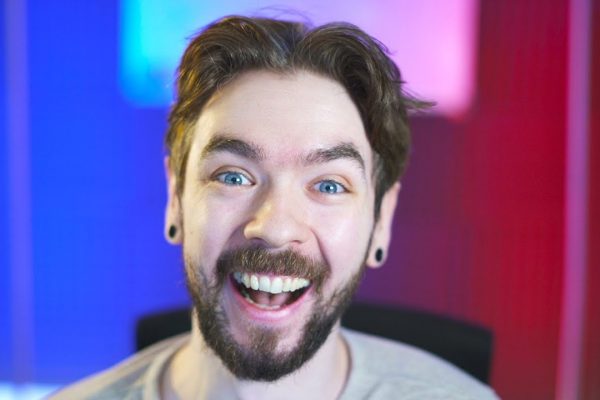 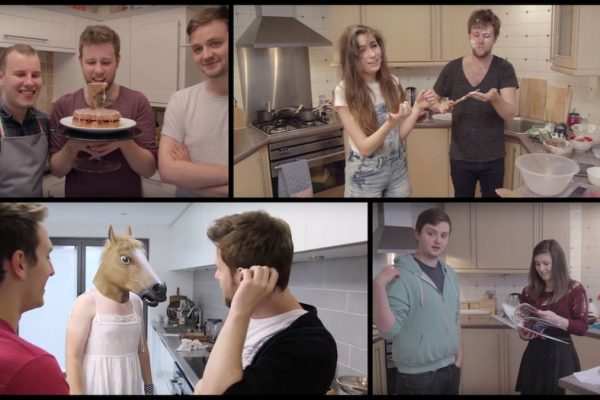