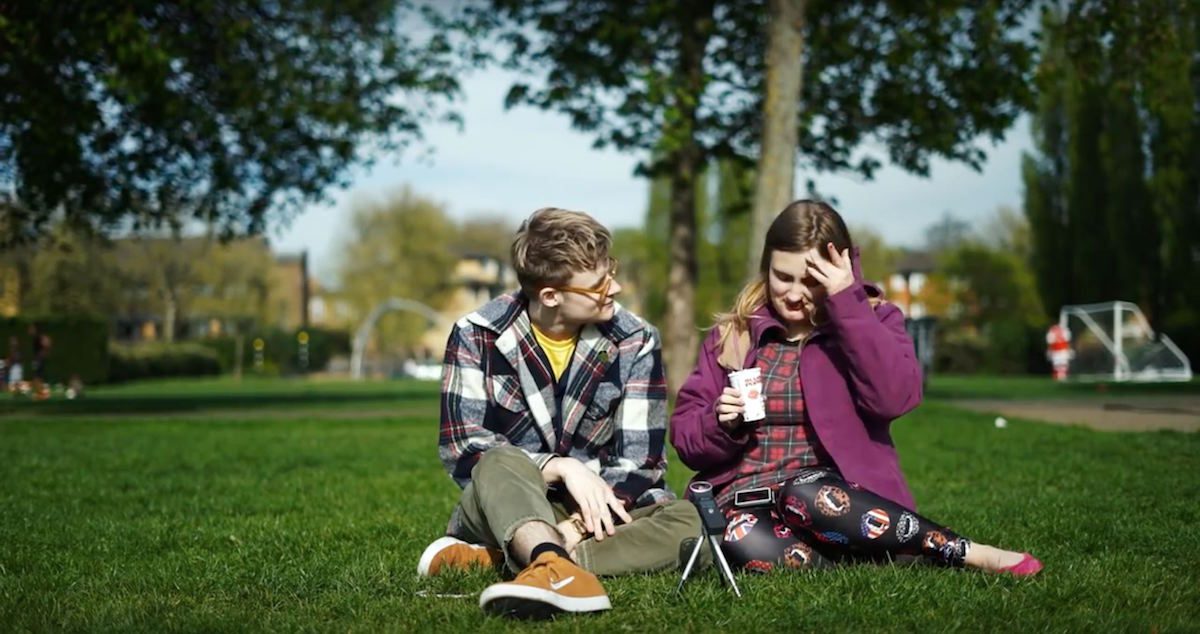 It’s time to bid adieu to the Easter Bunny for another year.

We hope you enjoyed copious amounts of Cadbury Mini Eggs, participated in many an Easter egg hunt, decorated the heck out of some chocolate nests, and spent Saturday night huddled around the television with your loved ones watching the Series 10 premiere of Doctor Who.

Now, we know you’re probably still recovering from that sugar coma you promised yourself you’d avoid this year, and what better way to recover than to spend the day watching some of the best videos YouTube has to offer? From new music to a discussion of stress and how to handle it, this week’s Round-Up has everything you need to shake the sugar withdrawal. So, without further ado, onto the videos!

Kicking off this week’s Round-Up is our all-time fave Cameron Sanderson with the music video for his song I Don’t Want to Drive, and it’s everything we ever wanted and more.

Where do we begin? We could start by telling you how beautiful Cameron’s voice is, but you already know that. We could create a dance sequence to the sick beat the track blasts into our eardrums, but that would involve getting up from our office chairs and we never said we were fans of physical activity (we are an online magazine, after all). How about we simply tell you that I Don’t Want to Drive and the EP in which it’s featured are a culmination of all the hard work Cameron has put into his music and YouTube channel over the years, and if you’re a fan like us, they’ll leave you feeling infinite amounts of pride?

There, we think that works.

Two musical videos in a row?! You must be thinking we’ve gone MAD, but trust us, you’ll be thanking us for including this cover from Samantha Harvey and US vlogger Mike Tompkins once you give it a watch.

An acapella fan’s dream, this cover of Kygo and Selena Gomez’s It Ain’t Me shows us how to lay down the rhythm with the only instrument that matters: our mouths. We can’t believe we’ve lived our entire lives thinking we needed to know how to play the guitar or mix sounds on a computer to play music, when all along all we needed to know was how to beatbox. With this knowledge in hand, you can bet we’re going to be giving our music career another go.

Be sure to be on the lookout for our debut album, TenEighty: We Bet You Didn’t Think We Could Beatbox As Well As We Can Write, out later this year. We guarantee it’ll be something you’ve never heard before.

Bertie Gilbert is always looking for ways to change up his filmmaking and grow as a creator, and we think his latest video is truly one of the best he’s ever uploaded.

The video is the story of Bertie’s sister Gene, who isn’t letting a learning disability and mental health issues prevent her from gaining the independence she’s always wanted. There are many words we could use to describe it – beautiful, lovely, touching, inspiring – but we don’t feel they’re strong enough. Watch it and you’ll see what we mean.

Gene, we’re so incredibly happy for you. You’ve got a bright future ahead of you and we know you’ll go far! And Bertie, thank you so much for introducing us to your sister. It’s touching to see the love your family has for each other.

How to be less “stressed” | NewGreenShoe

Do you find yourself struggling with stress every day? Want to tackle it with the ferocity of a thousand goats? Then this video from Owen Daughtery is the one for you!

Discussing everything from doing daily exercise to breathing to becoming the world’s coolest superhero (umm, well actually, we’re not too sure about that last one), Owen offers up a frank discussion about stress and how to combat it. He even goes as far as to fill us in on the difference between stress and being nervous, which we definitely needed to hear because we often find ourselves confusing the two, which makes us even more stressed! Honestly, it’s a cycle.

Thanks for the tips, Owen. We’ll be sure to utilize them the next time that stress ball on our desk just won’t do the trick.

We simply couldn’t let another Round-Up go by without including a poem from the Queen of Poetry herself, Leena Normington. Thankfully for us, she uploaded Is my life boring? earlier this week.

Discussing life and our perception of it, Is my life boring? is the poem we didn’t know we needed to hear. However, upon listening to it, we feel as if we’ve needed its words for a while. We often find ourselves thinking that we aren’t living life to the fullest, that we aren’t experiencing enough adventures and excitement, but we have to remember that not every day needs to be filled to the brim with activities. Mundanity is a part of life we need to accept, and even embrace, for it allows us to appreciate our adventures so much more.

As Leena says, “Even Robin Hood went adventure-less from time to time”.

Still in need of videos? It’s a good thing we never stop at just five….

Gary C treated us to his own rendition of the Beauty and the Beast theme. We wouldn’t expect anything less from the world’s biggest Disney fan!

Cheese is without a doubt the best food known to man (we dare you to find something better… we bet you can’t), so of course the SORTEDfood lads would dedicate a video to the most ultimate cheese battle EVER.

We never knew we needed to hear Antoinette Belle cover Amy Winehouse until we heard her rendition of Love is a Losing Game! Heart-eye emojis all around.

Representation and the discussion of social issues are incredibly important in today’s social climate, and Lucy Moon gives us a few reasons as to why we should care.