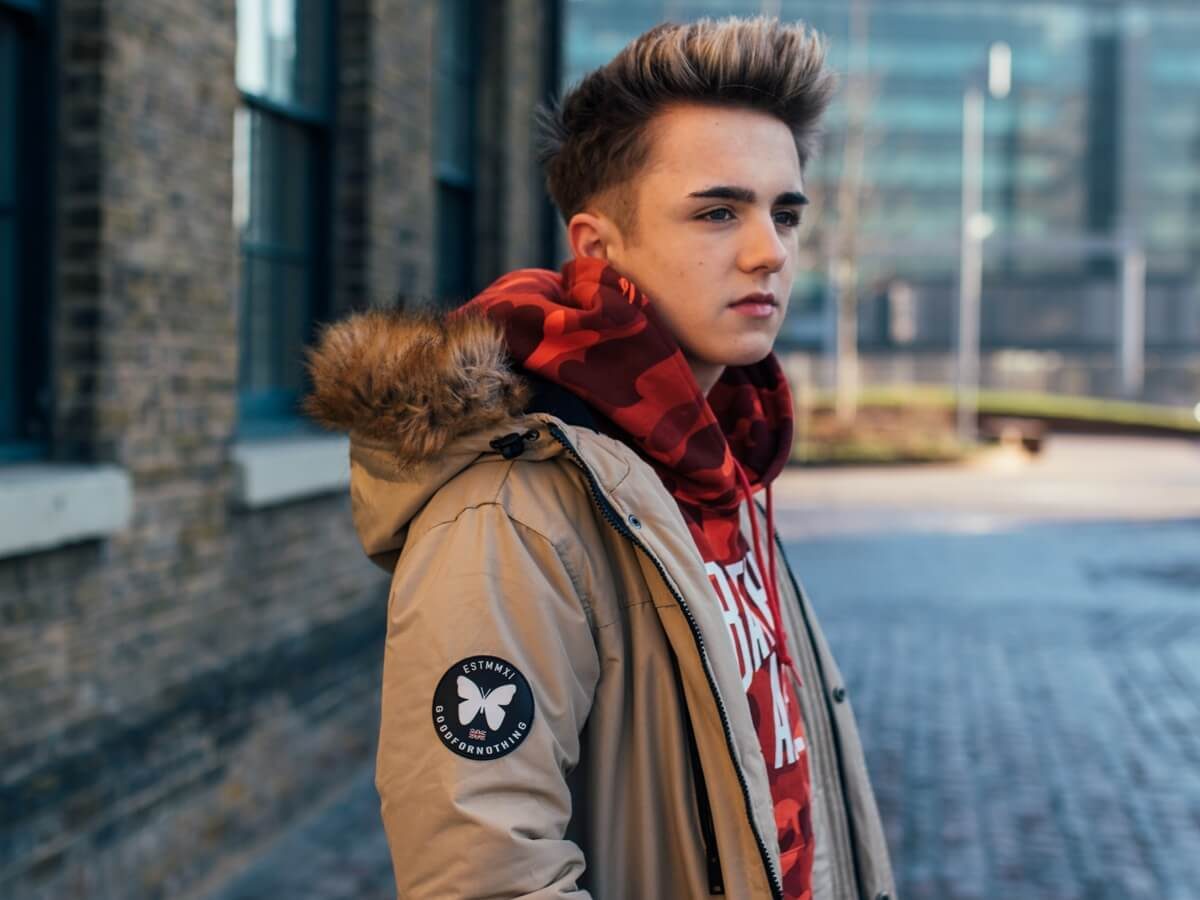 Jake Mitchell has been making videos since he was eight, amassing over one million subscribers on his main YouTube channel – and he recently released his debut single. Along with all this success, he’s just passed his driving test. TenEighty talks to Jake about growing up online, trying to find balance between his public and private life, and his move into music…

We’re in London, and Jake Mitchell has managed to find a spare moment between two days of filming for the music video for his debut single Echoes, which he recorded in Amsterdam.

It’s been a significant jump going from making videos with LEGO pieces on his dad’s YouTube channel to where he is now. “I was just uploading videos,” he says, “until, two years ago, I had my first manager, and that was when I was like, ‘This is weird!’

“I haven’t grown overnight; it’s been such a long process,” affirms Jake. “Like, it is awesome and I’m so grateful, but it’s not like a massive shock. If it was overnight, you’d be like, ‘What am I doing? How is this happening?’” 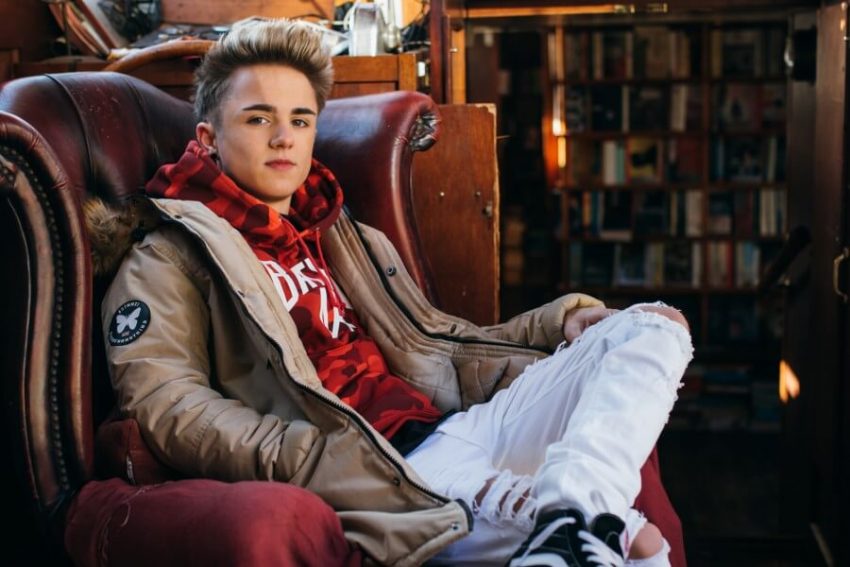 Jake is of the new generation of YouTube: able to listen to the advice of earlier YouTubers, watch what they do, and use that knowledge to build his own channel. “When I started to do vlogging, I started watching who was big at the time,” he says. “Joe Sugg had just started. Alfie [Deyes] and the crew, so Zoe [Sugg] and Marcus [Butler]. So I gave it a go and this is where I am now.”

The steady growth of his channel and the opportunities to learn from YouTube pioneers have allowed him to carefully cultivate his online career. As a result, he’s highly self-aware of what he creates, his brand, and his audience. “I’m not the kind of person who does everything that’s offered,” says Jake, about brand deals. “I turn down a lot more than what I do.

“There’s a lot of people who would do everything that’s thrown at them, but if it doesn’t suit my brand, my channel, or my audience aren’t interested in it, then why would I do it?”

Jake gives an example: after the widespread backlash against prank videos in 2016, he has stepped back from creating them. “I did a prank on my friend, which was real, but I haven’t done any since,” he explains, “because even if it’s 100% real, you’re gonna get people who are going to say it’s fake because you don’t know if it’s real or not. Anyone can stage anything.

“Challenge videos are always fun,” Jake continues. “For example, the Rainbow Milk Challenge I did with my friends was just funny, and fun for the people around me to watch as well.”

“I haven’t grown overnight; it’s been such a long process…”

Who does he create videos for? His family and friends around him, or his subscribers? “Everyone, really. Obviously my audience is the most important because they’re why I’m where I’m at.”

Jake is comfortable online and offline with his audience, having grown up meeting them. “When I did my first event, I was 14, and there were people asking for pictures and it was very weird – I didn’t understand it at all,” he says.

“Now it’s just like, ‘Hi, how are you?’ – you have a conversation and get to know the person. If it’s one person, I can have a conversation; if it’s at a meetup, I can’t, because there’s literally no time and it’s the most tiring thing in the world.”

While Jake acknowledges how overwhelming this can be, he tries his best to make sure he always has a way to communicate with his fans. “When they’ve been watching my videos for a while they feel like they know me, but it’s the first time I’ve ever met them,” he says. “They have so much to say and I’m trying to take it all in and they get moved along, and I’m just like, ‘Follow me on Twitter later, tweet me “pineapple”!’ I always give everyone a word to tweet at me, and I follow that person.”

Jake believes it’s important to give back, and that’s why he often does following sprees with his audience. “I don’t want to be one of those people who are like, ‘I’ve got loads of followers, I don’t want to talk to anyone now’,” he says. “I try to get involved with everyone. I want everyone to feel welcome.”

He also recognises that his fanbase is young, and therefore feels a sense of responsibility to them. “For example, if I’m with my friends and one of them was 18 and having a drink, I wouldn’t film it,” he says. “Everyone has a drink but I don’t want to promote it.

“I think it’s important to do that, especially if you’re like me and a lot of your audience are young girls.” 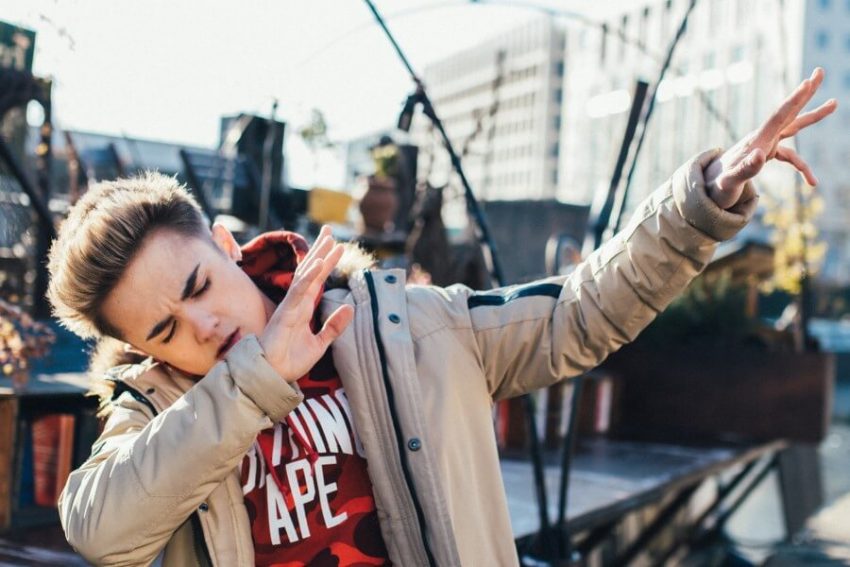 Considering how open Jake is with his audience, finding the balance between private and personal life can be difficult, and this is something many YouTubers struggle with, especially with the rise of daily vlogs.

Jake has a second channel, Jake’s Life, which he uses to show elements of his personal life, but he is very conscious of what he puts on it. “I’m not 14 anymore. I do other things, like have fun,” he says. “I have a personal life, so I have to be careful about what gets out.”

We ask about how he feels sharing so many moments online. Birthdays, family gatherings, and days out with friends are all recorded and posted as part of Jake’s Life. There are currently over 300 videos that anyone can view. “I like it because when I’m older I can look back at Christmas Day last year,” he says. “Even now, I look back at the videos I made when I was ten and it’s so embarrassing!”

His vlogs have become digital and visual diary entries that he writes, but unlike a teenage journal kept hidden under a mattress, everyone can read them.

“Sometimes it’s quite scary,” he admits, “because you meet someone, say at Summer in the City, and they’re like, ‘How was your meal at so-and-so the other day?’, and you’re like, ‘What? How the hell do you know that?’, and they remind you that you vlogged it.”

Having so much of yourself online leaves you open to criticism, and sometimes you can get swept up in controversy. In early January, Jake was accused of cheating on his now ex-girlfriend Saffron Barker, which led to an online backlash and numerous ‘exposé’ videos. Not long after, Jake took a break from daily vlogging.

Jake affirms that none of it is true. “I don’t want to add fuel to the fire or give it any more airtime,” he says. “If people are just going to assume things and listen to rumours then I’m not going to waste my time and post stuff on the internet.” 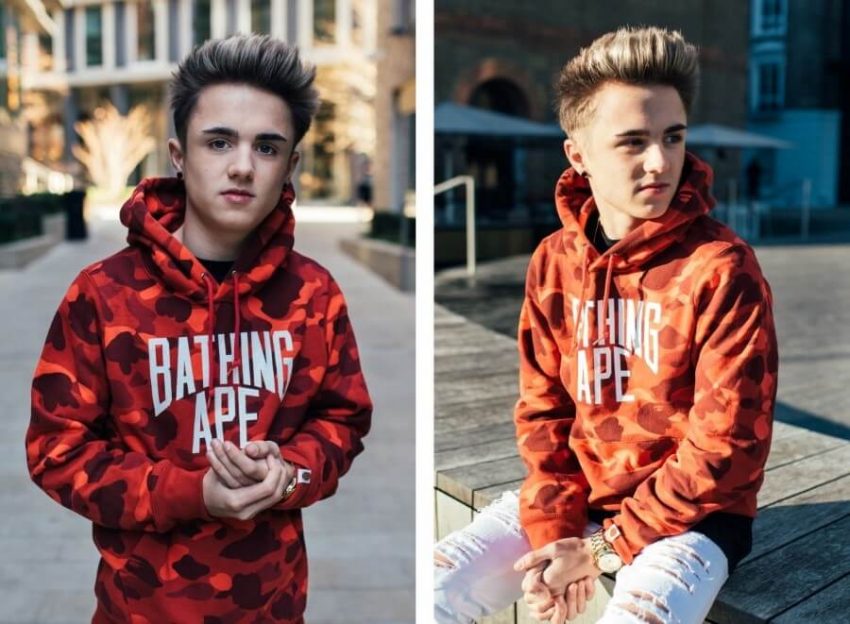 Jake remains undeterred. Having grown up on YouTube, he seems able to brush off negativity received both online and in his personal life. “People criticise everything, it’s just [about] if you want it to affect you or not,” he says. “If you let it get to you, then it can cause you to want to quit. I don’t want other people’s opinions to make me not want to do something.”

Jake’s family has been consistently supportive of his work from the beginning. In fact, his dad was the one who got him started, uploading Jake’s videos when he was eight. It’s something that Jake is passing on, having recently collaborated with his younger cousin. “I thought [my cousin] was going to be really shy, but he took the limelight off me!” Jake proclaims. “With vlogging on my second channel, I’ll get everyone in it, like I did on Christmas Day last year. I show my family all my videos.”

However, the majority of his videos were made while he was still in secondary school, and it was a different story there. He received mixed responses from his classmates and teachers: some were supportive, while others failed to understand.

“Also, there were people in my year who were like, ‘That’s stupid, you shouldn’t be doing that, you should be concentrating on your exams’, and stuff like that,” Jake continues. “Exams are important, but for my career, there’s a time and place. I had to do stuff then to build it up.

“If you’re young enough, you’re building everything so by the time you’re 18, you’re pretty much sorted,” he affirms. “I’m in a lucky position where I’ve worked hard for something and I’m able to live off what I’m doing.” 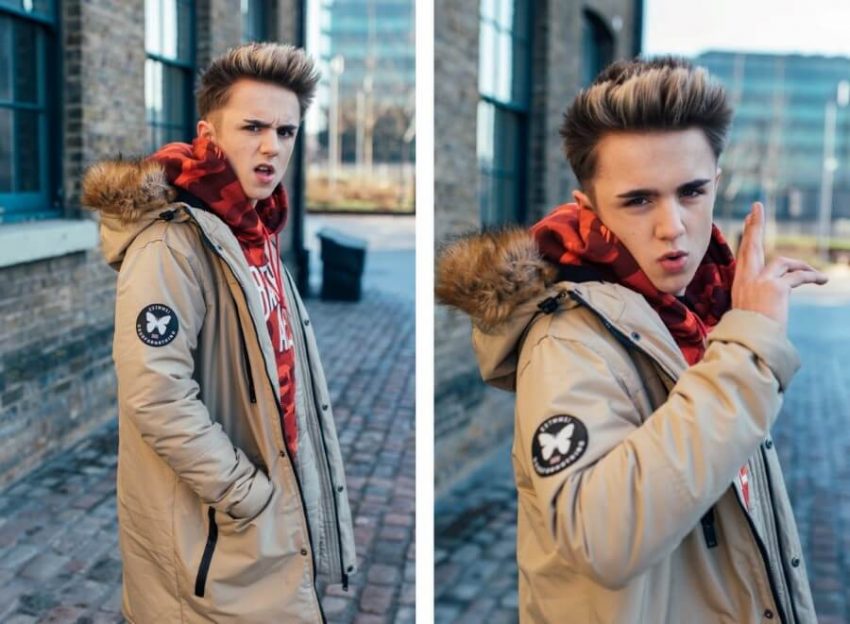 Jake has a clear vision for himself, and the clash between this and what he experienced at school in many ways became the influence for his debut single Echoes. “Echoes means people saying things to your face and behind your back, but it’s just like echoes in the background,” he explains.

Jake cites Chris Brown and Drake as his musical influences, as well as being an avid listener to remixes. He describes Echoes and the music video for it as “dark, in-your-face, and with an urban feel”. And this is only the beginning of his burgeoning career in music.

“Everyone listens to music, whether it’s old music, new music, remixes; it’s like magic,” he says. “So I’m hoping that, obviously, my audience likes it, but people will listen to the song who don’t know who I am and will like it.

“If the song does well, we are in the stages of looking into a doing an EP. All of my fingers are crossed!”

“I don’t want to be one of those people who are like, ‘I’ve got loads of followers, I don’t want to talk to anyone now’ — I try to get involved with everyone…”

The last few years have seen a wave of YouTubers reaching out into the mainstream, with book deals, movies, and record deals. Jake is really aware of how the platform can open up doors, and he’s curious to try out more: “It’s like having your own business and you can grow from that.

“There were talks about me doing a book but I don’t think I’m ready for it,” he says. “There’s too much going on and everyone thinks if you do a book, you’re doing it for the sake of it.”

He is aware that some may be cynical about his move into music. But this doesn’t faze him. “If I know people are going to listen to it, that’s why I’m going to do it. I’m not going to invest into it for no-one to listen to it,” he says.

“If they had the opportunity to do it, they would do it,” Jake affirms. “Most of it is jealousy.”

So, after earning such a large following, releasing a single, and surviving school, what’s next? “I’ll be doing more music, and I’ve always wanted to try acting,” he says. “Preferably something on TV, maybe a Netflix series or something.

“I just want to try new things whilst I can and make the most of it.” 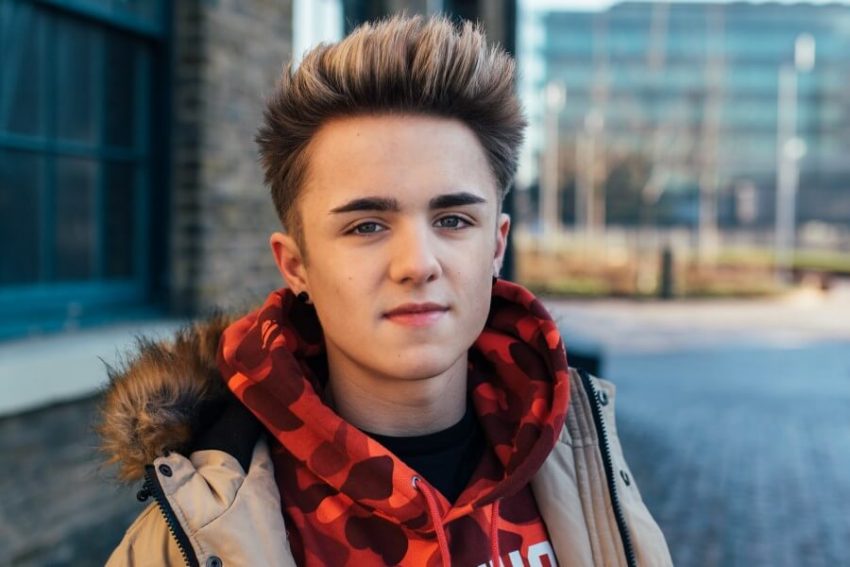 Why not check out these exclusive photosets:

Alternatively, read some of our previous TenEighty interviews:

About Christy Ku
Writer of words, teller of tales, performing poet and general maker of things (with a little bit of alliteration).
View All Posts by Author
Six Times Joe Sugg and Caspar Lee Were BFF Goals
YouTubers Do Mother’s Day 2017