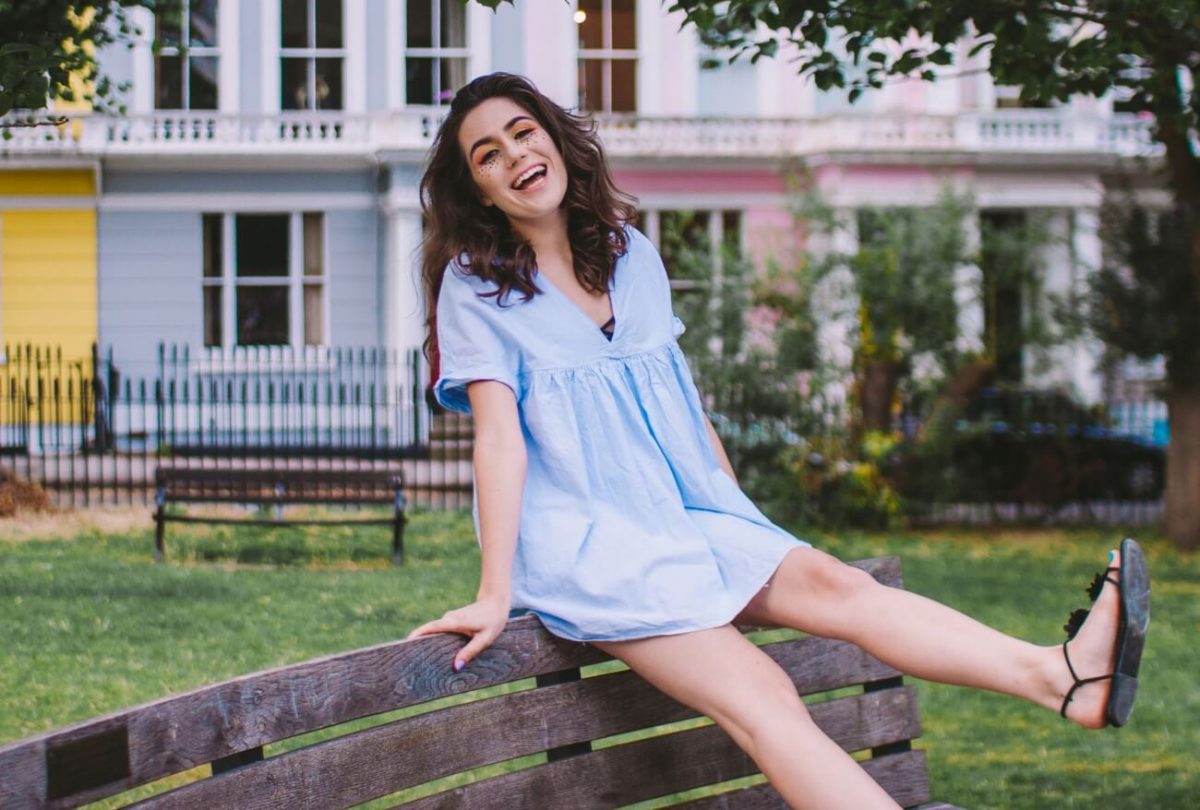 Ahead of another US tour and a new EP, Dodie Clark talks to TenEighty about oversharing, touring, and being #squadgoals.

Dodie Clark’s recent ventures are multifaceted – presenting, touring, songwriting, singing, having general adventures with brands, and just vlogging honestly in her bedroom. But if she had to pick a favourite, what would it be?

“I’m doing a lot of different work around YouTube and presenting, but when it comes down to it, music is the thing that makes me happy,” Dodie states.

Songwriting is definitely one of Dodie’s strengths – her YouTube channel Doddleoddle is filled with astute and amusing original songs as well as poignant covers. She’s currently working on an EP, to be released later in the year. 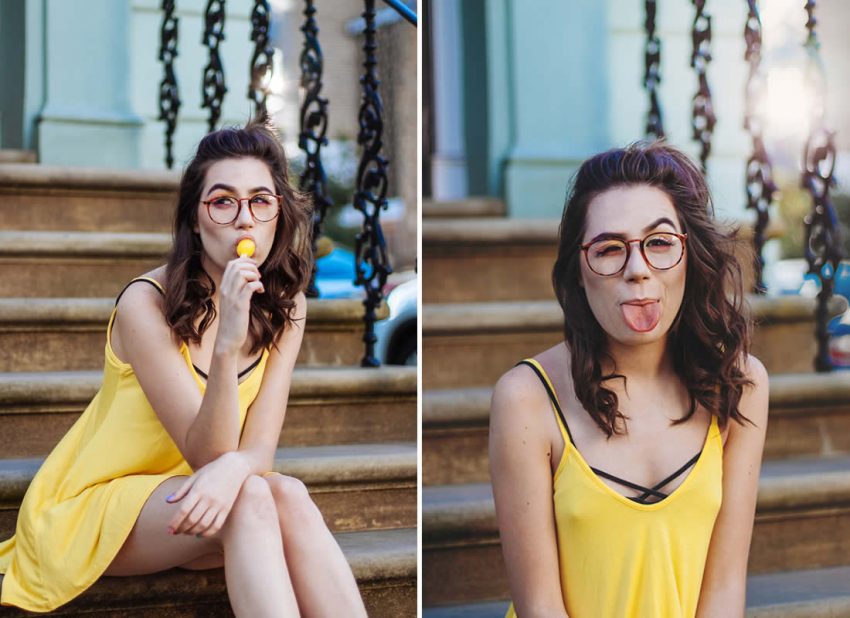 “I really like the idea of quirky little things on an EP – it’s going to have two little interlude tunes, one of which I’m yet to write,” she says. (The other, I Have A Hole In My Tooth (And My Dentists Are Shut), is already online.)

“There’s one really old song, like really old song, which will be fun to revamp, then put to bed – I’ve clung on to it since I was 17. And there’s a brand new song – the only time people have heard it is when I’ve played it live.”

While her Doddleoddle channel is filled with music, Dodie’s other channel, Doddlevloggle, is “where all the crap stuff goes”. But she doesn’t see is as a ‘second’ channel any more. “It used to be, and that’s how I set it up,” she says. “But now Doddlevloggle is my diary, my online blog. It’s so handy to have a place where I can just do whatever I want and not care.”

This transparency is what endears viewers to Dodie; for example, her video depression, anxiety, depersonalisation, in which she detailed her recent struggles with her mental health. “I was in so much pain and I was struggling so badly. I needed to be cured straight away, but that’s not how mental health works, and that’s okay,” she tells us. “Sure, I’m oversharing about my depression and anxiety, depersonalisation and all this stuff, but I’m sending out a message that I will get better, even if I don’t feel like I will. And I won’t stop trying until I do. I’m going to go to therapy, it’s so important to do that. 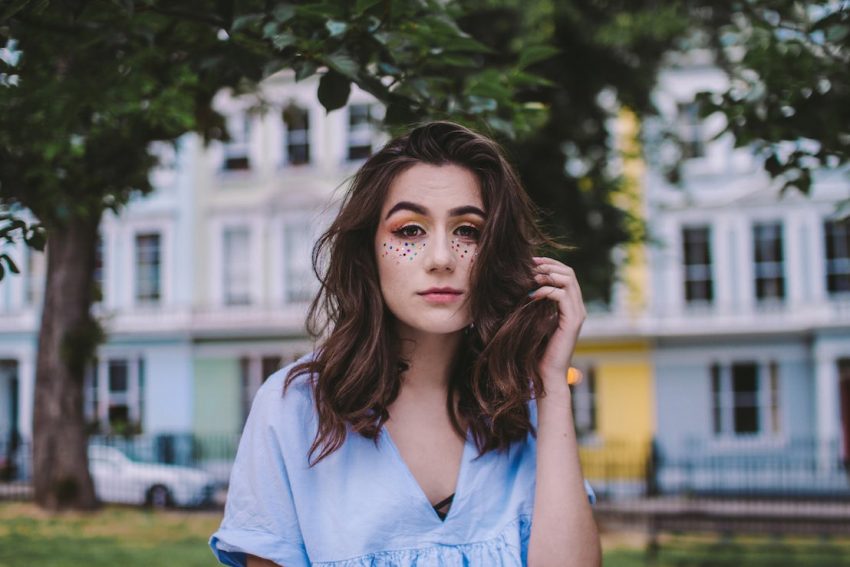 Her audience responded to depression, anxiety, depersonalisation in their droves. “There are a lot of people saying thank you, that they’re going to get help, but it’s sad that so many people can relate to it,” she says. “It’s like we’re all on a journey together, but it’s made me realise that no one’s okay. We are all struggling, and as sad as that is, it means you’re not alone either, we’re all going through this weird life journey and it’s nice to connect over that.

“And my audience gives me advice – when I posted I was going to therapy, someone said ‘word of advice: it’s okay to test out a few; you’ve not cheated on them’.”

“I’m sending out a message that I will get better, even if I don’t feel like I will”

Dodie also connects to her audience through her music, which she’s reminded of when she’s on tour. “I forget that there’s music of mine that gets people through stuff,” she says. “It’s easy to forget you’re not just talking to a crowd of people. You’re singing to one person. It’s like a relationship with that person, even though you’re singing to 100,000 people. And I will never ever get over people singing my lyrics back at me.

“When I’m writing songs now, I think ‘if I write one word differently, people will sing that instead’.

“I love touring. I really love meeting people. It’s so strange to go to different places and meet people from across the world who know you so well,” she says. “I can’t wait to go on tour again. I’m doing one in November on the east coast of the US – the same place I did in May.

“I loved that tour so much – it was the best place I’ve been mentally for so long,” she admits. “One night, we stayed in a teddy bear hostel – it was bizarre! Tessa [Violet], Jon [Cozart], Rusty [Clanton] and me, all in this one room, just chatting. It was so wonderful, like a sleepover!” 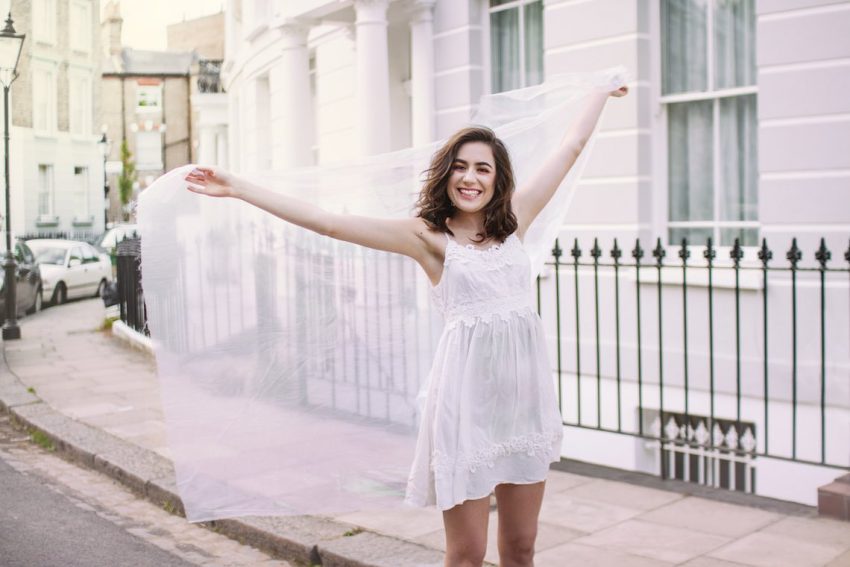 As well as standalone gigs and tours, Dodie has played at Vidcon and Summer in the City (SitC), and says she loves playing both. “Vidcon this year was really good. I was very chill,” she says. “I got on stage for my soundcheck and there were people there already. I was like ‘What are you doing? Go away, you’re too early!’, but it helped me be comfortable because [later] I felt like I’d already done it. I really enjoyed it.

“It’s so bizarre how SitC has gotten bigger every year. I get so nervous, like weeks before, and can’t relax properly until it’s all done with. But as soon as I get on stage I’m fine and I just love it so much. It’s so much fun.”

“I love touring. It’s so strange to go to different places and meet people from across the world who know you so well”

But there are downsides to gigs and touring, not least the stage fright Dodie gets every night before she plays. “I know it will be fine once I go on, but I cannot get rid of the feeling,” she explains.

“Touring also tends to trigger depressive episodes, because I constantly obsess –  ‘I’m not ecstatic and I should be because this is amazing. Why am I not feeling this way?’ – that keeps going over and over in my head.”

Dodie says her mental health issues started when she was 17, but before that, life felt blissful. “When I was younger, I didn’t believe [bad] mental health existed, because I was so happy. I didn’t understand, but thank god I didn’t, because if I did I wouldn’t have been so happy. You can only really understand it once you’ve gone through it.

“I love reading my comments on Doddlevloggle, because people write paragraphs. It’s so interesting to read about their lives, and sometimes I learn things from them,” she says. “It’s like having loads of friends, which is great because I was such a lonely, nerdy, weird kid.” 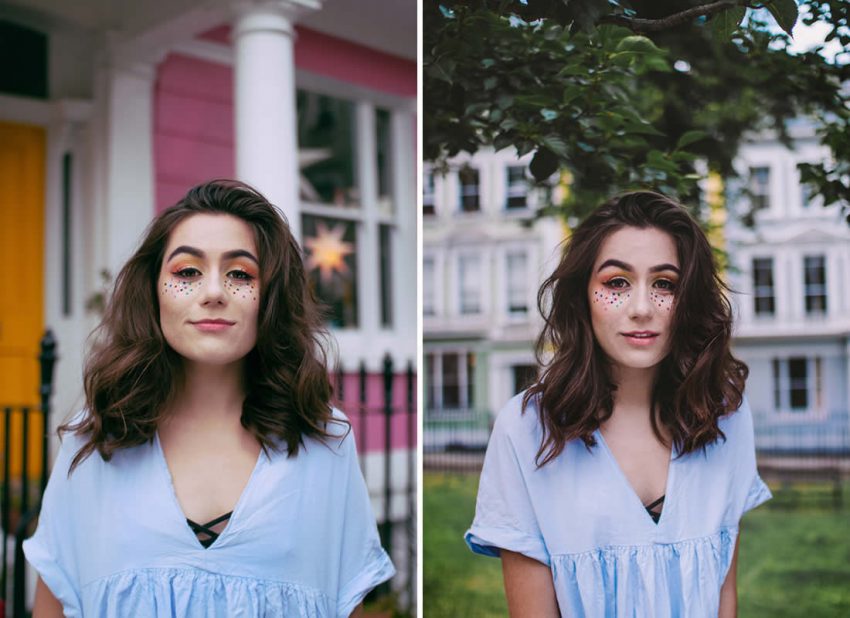 Now, Dodie doesn’t have any shortage of friends. “I love my friendship group so much! I’m so lucky. Everyone is creative and kind and smart and objective and genuine and caring. We are absolutely #squadgoals,” she says, before refusing to name who is in it for fear of forgetting someone. “Everyone can be in my squad!”

Despite having such a great #squad, Dodie doesn’t want to be the next Taylor Swift. “I don’t want to be a mainstream musician at all. I’ve dipped my toe in the mainstream music industry and it’s ugly, it’s not nice at all,” she tells us. “I’d much rather be different to that, maybe have my music used in films. That would be perfect – there’s so much fun in writing ambiguously enough to be used for a film, but also have meaning to you and the characters. Mainstream music feels more like ‘Let’s get a hit, let’s write in this structure.’ I love the freedom of writing for film.”

“I’m not allowed to overshare when presenting because it’s not professional, and that’s okay! It can be a lot of fun”

Dodie’s original songs range from highly personal ballads to humorous ditties (and is often a combination of the two), and she has a variety of musical influences. From Regina Spektor and Ingrid Michaelson to the Staves and Darwin Deez, Dodie describes the music she draws from as having “quirky harmonies, maybe a tad electronic but also very raw-sounding”.

She cites Jose Vanders of Oh Wonder (and previously of LAYLA) as someone she is hugely inspired by. “I’ve always adored her music. Of course I love Oh Wonder, but I really wish she’d keep doing stuff on the side as well. She’s so good at telling a story through music, and it makes me sad to know I’ll probably never hear a LAYLA original. It breaks my heart, so I’m gonna make them instead!”

As well as making music, Dodie has been dabbling in presenting, including a deal with Coca-Cola. “I’m so lucky. They just email me now and again to ask if there’s anything I want to do for new episodes, then ask if I want to take friends with me. It’s so cool!” she says. But she doesn’t want to use YouTube to transition into presenting full-time, like some other YouTubers have. “Presenting is not what I want to do, and I’m not very good at it, either. I like YouTube because I like to pour myself online and get other people’s stories, whereas presenting is for a company, and they have their own brand to adhere to.

“I’m not allowed to overshare because it’s not professional, and that’s okay! But presenting can be a lot of fun.” 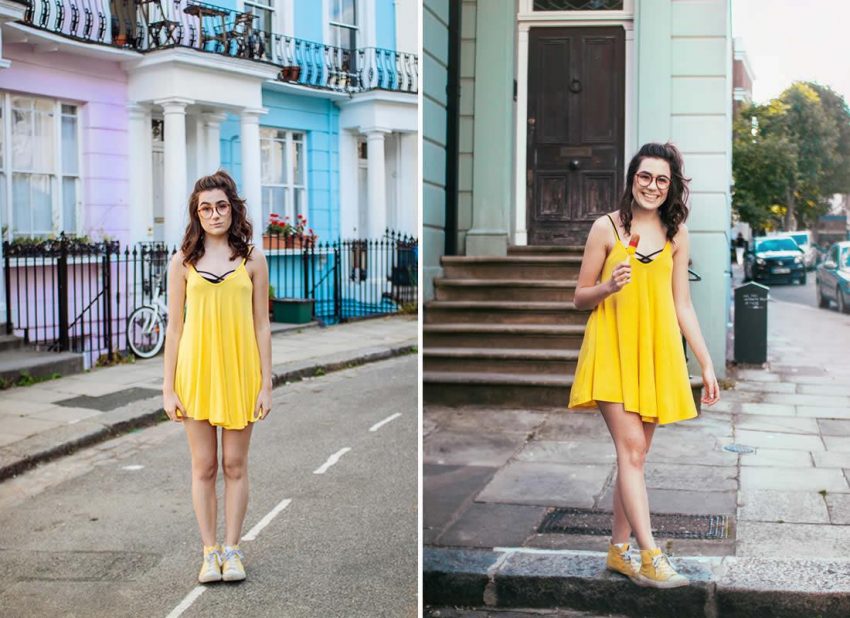 And although Dodie has spoken out about brand deals before, she doesn’t discount them altogether. “Brand deals can be brilliant. I’ve got one coming up, and because I was so stressed I said ‘You know what, I’m going to turn this into a massive sketch project thing, and I’m going to ask my lovely creative friends just to do it for me because I think it would be cool’,” she explains. “It’s so great when you get a budget to make something. It’s gonna be such a good sketch, and it wouldn’t have got made if it wasn’t for the brand giving us the idea and the budget.

“But you have to be genuine. Why would you lie? I think brand deals can be good, if you do them in an authentic way.”

But for now, Dodie wants to concentrate on music (and improving her mental health). That’s not to say she will ever give up YouTube, even if she does ‘make it’. 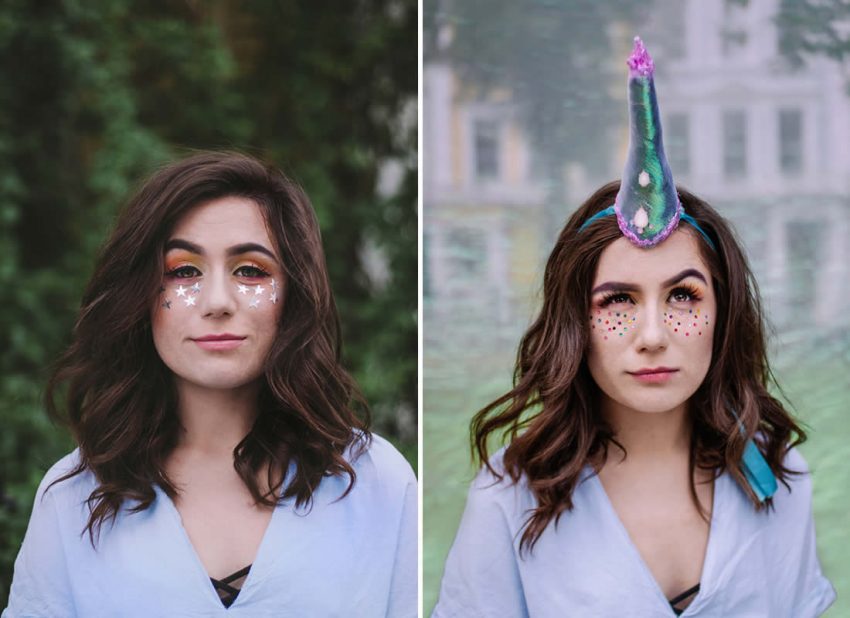 “If I was earning zero money from YouTube, of course I’d still make videos,” she insists. “I can’t not! I film everything. I want to make creative things. I’ve done that throughout school and work. My main goal was never to make money [on YouTube]. I’m lucky that I do, and I know it’s easy to say this, but I absolutely would still make videos no matter what.

“Making music is my jam. Hopefully there will be loads more EPs, loads more tours. But I’m making videos for me, so YouTube will always be my online diary.”

Check out these exclusive photosets:

Alternatively, read some of our previous TenEighty interviews: