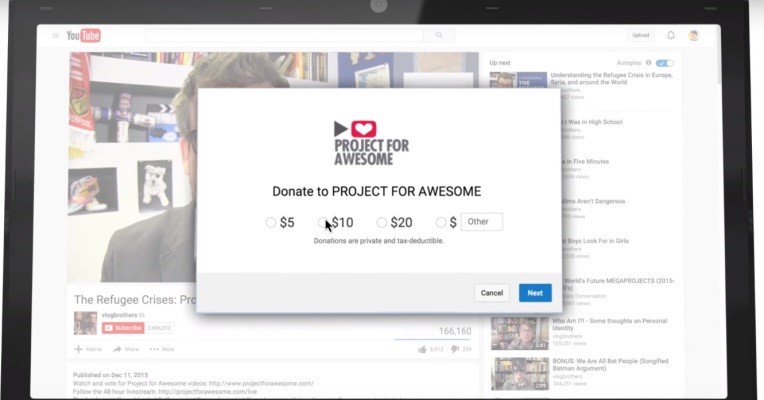 The US version of the YouTube Charities Programme has launched a “donation card” feature, making it simpler for viewers and YouTubers to give money to their chosen charities.

The scale of YouTube as a social platform has made it an ideal way to raise money for charities and social causes, as well as to increase awareness of world issues. YouTubers regularly raise funds and show support for charitable causes on the site. However, the money raised through the influence of these videos is usually sent via a third party, such as JustGiving.

In the USA, where the Charities Programme is known as the Nonprofit Program, this is all set to change with the addition of the donation card. When added to a video, the card will give the viewer the opportunity to donate directly to the creator’s chosen charity though the video itself, without needing to click away.

YouTube have also stated that they will cover all costs associated with donating, meaning that one hundred percent of the money donated via the card goes directly to the charity.

The tool has already been utilised by John Green in his video, The Refugee Crises: Project for Awesome 2015.

A video posted earlier this month by the Nonprofit Program explains the concept of the donation cards, as well as how to add them to your own videos.

About Danielle Freeman-Grantham
Pretends to be a Writer and Filmmaker but mainly stays in bed all day and watches YouTube videos.
View All Posts by Author
Gary C and Roland West Take Part In LGBT Panel
Weekly Round-Up: 9 – 15 February 2016