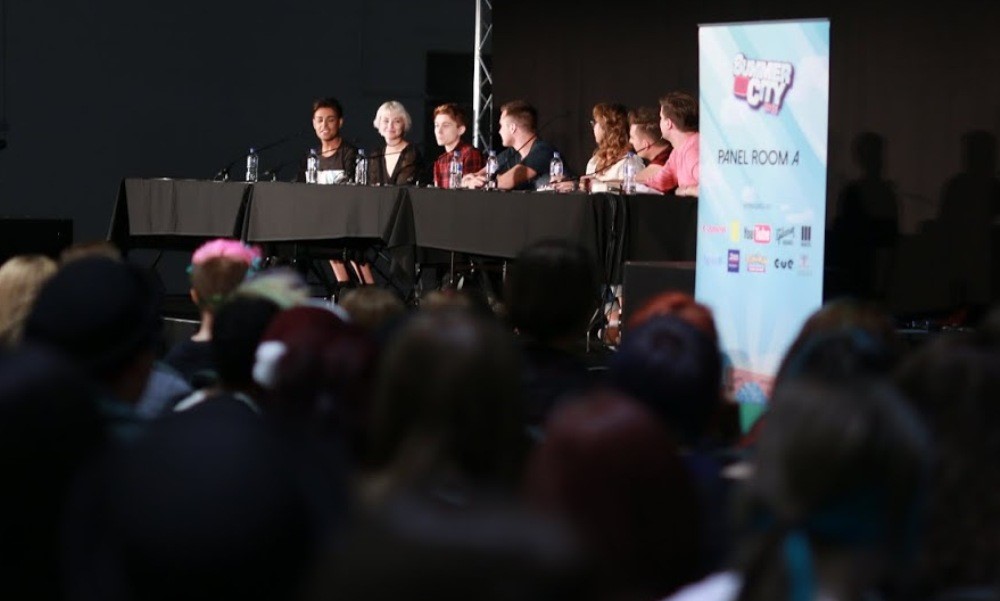 The LGBTQ+ panel at Summer in the City 2015 took place on Saturday in Panel Room A, chaired by Jazza John, and featuring Laci Green, Alex Bertie, and Savannah Brown.

“This is, like, a little pet project of mine,” explained moderator Jazza John, one of the team behind Summer in the City itself, as he introduced the panel. “There’s like, four or five organisers, and I’m the only gay one. So I was like ‘We need to do an LGBTQ+ panel’ last year, and we did, and it quickly became one of our most tweeted-about and most popular panels – which is sick, and amazing, and awesome.

“And so it’s back again this year!” he announced, to cheering and applause.

Savannah was asked about coming out, having only recently done so online. “It’s always been something that I wanted to talk about, but my situation didn’t really allow for it,” she explained. “But now that I’ve moved out – I live in London now – I was able to make my coming out video.”

Coming out has had very little impact on her content. “People were like ‘That’s awesome’, and then we started talking about how my day was again. Obviously it’s significant – it’s significant for everybody – but it’s a facet of yourself, and there’s so much else to you.”

Laci, however, felt her sexual orientation was more important to her videos. “I think it’s had a huge impact on how I approach Sex Ed,” she acknowledged. “I started my channel because I felt like there wasn’t adequate Sex Ed, in the States for sure, but also I have a lot of UK friends, and people around the world, that are just not getting good Sex Ed. Part of that is that it’s not inclusive. It’s not inclusive of the trans spectrum, of various sexual orientations – it’s heteronormative.

“So that’s definitely been a big driving force behind my work. But interestingly, because my brand is sex, I try to keep my sex life and my sexuality out of my work.”

After temporarily leaving YouTube behind, Riyadh’s return to the site exploded earlier this year with a video where his mum read his Grindr messages. “We do that most evenings,” he joked. “I just filmed that one time!

“I left YouTube when I was about 16,” he recalled, “because of the homophobic abuse and death threats. It was in the early, early stages of YouTube, and they didn’t have the structures in place to protect creators. And I wasn’t out of the closet, so they were calling me all these horrible names, and I was thinking ‘Jesus, if my parents find out, I’m done, that’s it, I’m kicked out’, because that’s what I thought was going to happen. I even went to the police about it, secretly, at 16, and they didn’t do anything about it.

“When I was watching other people’s videos, like you guys,” he said, indicating his fellow panellists, “and Tyler Oakley in particular, I felt inspired, like ‘I really have to do this’. The big lucky video I had was that Grindr one.

“YouTube, for me, was a place I could find me, but at the same time, put myself out there. For so many years, I hated that I did this with my wrists, I hated that I walked like that or that I talked like this, or that I liked to wear these clothes, but then when I went on YouTube, I figured ‘I do better on this website the more me I am’.” 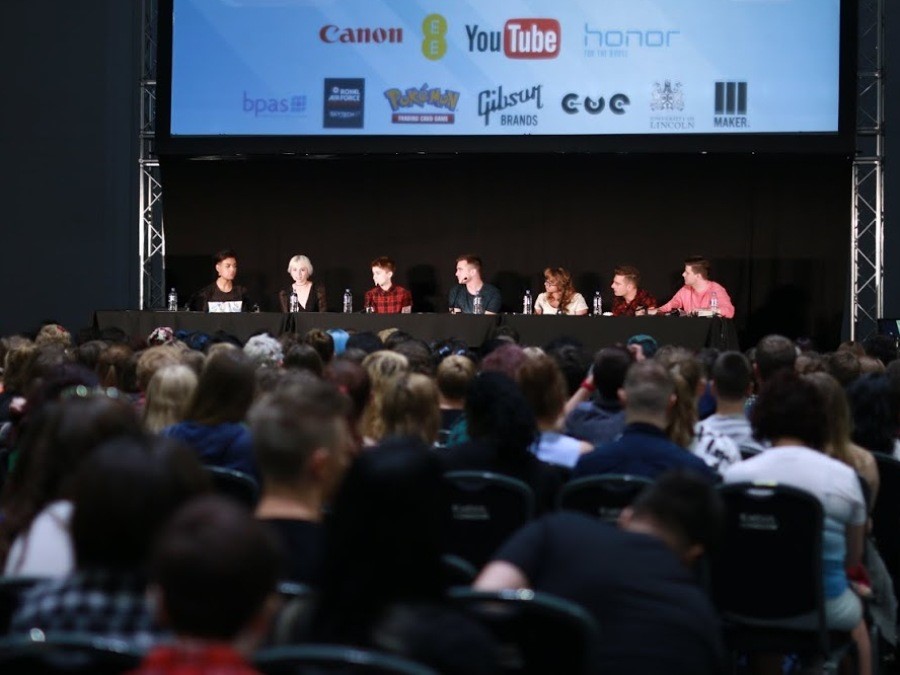 Joseph was asked about YouTubers who use their coming-out as a commercial opportunity. “Well I think gay people should get their money too,” he said, “but don’t be fake about it.”

Joseph also had concerns about the over-prominence of white, gay, cisgender male voices within the LGBTQ+ community (“We’ve just seen, with this Stonewall movie, they’ve rewritten Marsha P. Johnson, who threw the first brick in the frickin’ Stonewall riots – she’s been replaced by a white gay guy”) and felt that coming out was only acknowledged when it was a “certain kind of coming-out story” that often ignored racial diversity and the spectrum of trans* identities.

“I totally agree with that,” nodded Laci. “You’re with a man, you’re ‘straight’, you’re with a woman, you’re ‘gay’. But also, because I present as a very feminine person, people think ‘Oh, if you’re feminine-looking, you can’t really be queer’.”

Jazza pointed out that VidCon’s LGBTQ+ panel was renamed as the “Sexual Orientation panel” this year. “I decided not to change our one,” he explained, but asked the panel for less unwieldy names.

Joseph was pleased that Jazza had kept the name the same. “The T is not a sexual orientation,” he pointed out.

“I hate ‘LGBTQ+’,” said Riyadh. “Can’t stand it. The Q, I have a really big issue with that, because I was called ‘queer’ all through growing up. I think maybe it could be called ‘Sexual Orientation and Sexual Identity panel’?”

“I just want to throw out a term for people to think about,” said Laci. “GSM, or Gender and Sexual Minorities, which basically refers to anyone who is not hetero, cis, whatever. Think about it.”

“I second it,” said Calum. “Get the petition going guys!” The crowd applauded.

In the final minutes, the panel acknowledged the importance of the increasing legalisation of same-sex marriage, but they were all keen to point out that it isn’t the be-all and end-all of the LGBTQ+ rights movement.

“There are seriously pressing issues beyond the right to get married,” pointed out Laci. “Not that it’s not important, but there is a lot of violence in the communities. I have seen so many terrible things, and I live in a progressive community: people on the streets, people being harassed just walking down the street, being beat up. The homelessness issue in the US is heavily overrepresented within LGBT youth, because their parents don’t accept them, they push them out on the street, so our homeless population in the US is hugely LGBT, and hugely under-18. There’s so many different forms of oppression that go beyond ‘No, you can’t have this particular set of civil rights’. What about the right to be treated as a human beyond the law?” 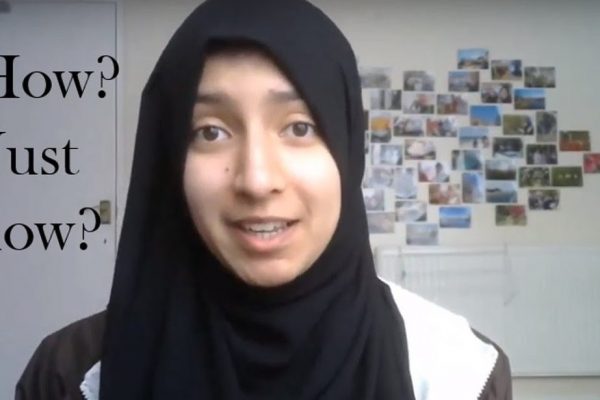 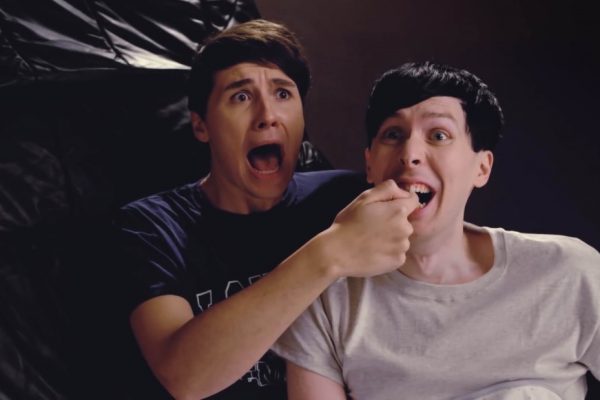